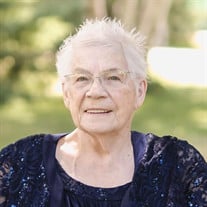 WEATHER DELAY: in anticipation of a winter storm, all services for Marlene have been rescheduled for 3:00 PM, Monday, January 20, 2020, in Northview Church, Fargo. Visitation will be one hour prior. +++++++++++++++++++++++++++++++++++++++++++++++++++++++++++++++++++++ Marlene I. Stevenson, 87, Fargo, ND, died Saturday, January 11, 2020 in Ecumen Evergreens in Fargo. Marlene Ida Hochstetler was born May 22, 1932 in Luck, WI to Homer and Ida (Olson) Hochstetler. She graduated from Ashland High School in Wisconsin. She furthered her education at North Central Bible College, Minneapolis, MN. On August 9, 1952, Marlene was united in marriage to Hugh Stevenson in Mellen, WI. They initially lived in Minneapolis while Hugh finished school at North Central. After that they resided in Ames, IA, where Hugh served as a Youth Pastor. They served parishes in Madrid, Cresco and Colfax, IA. In 1964, they moved to California to minister in Monrovia and Arcadia. In 1970, they relocated to the family farm in Georgetown, MN, and together pastored the Assembly of God in Ada, MN. In January 1987, they began Glad Tidings Assembly of God in West Fargo, ND. While there, Marlene became an ordained minister. They served the West Fargo community until Hugh passed away in 1996. Marlene enjoyed reading, especially mystery novels, and solving cryptograms. She was a talented musician, sharing her passion for worship with the piano and accordion. Aside from ministry, Marlene worked for American Crystal Sugar for over 30 years. She completed her work career with Dittmer Concrete in Fargo. After retirement, Marlene enjoyed volunteering her time teaching Sunday School at New Beginnings in West Fargo and spending time with family and friends. Marlene is survived by her three sons, Joel (Melia) Stevenson of Detroit Lakes, MN, Daniel (Julie) Stevenson of Elko, NV, and Michael (Stacie) Stevenson of Hawthorne, NV; eleven grandchildren and numerous great-grandchildren. In addition, she is survived by one brother, Leo Hochstetler; and one sister, Twyla (David) Squire. She was preceded in death by her parents; her husband, Hugh (1996); brothers, Orby Hochstetler and Larry Hochstetler; and sisters, Lois Reed and Velma Smedsrud. Funeral Service for Marlene will be held Saturday, January 18, 2020, at 11AM in Northview Church, (formerly First Assembly) in Fargo. Visitation will be held one hour prior to the service. Interment will be in Sunset Memorial Gardens, Fargo.

The family of Marlene I. Stevenson created this Life Tributes page to make it easy to share your memories.

WEATHER DELAY: in anticipation of a winter storm, all services...

Send flowers to the Stevenson family.