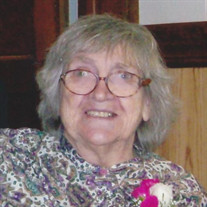 Marjorie P. Houglum, of Moorhead, MN, passed away in the early morning of Thursday, October 24, 2019, in Eventide on Eighth, Moorhead, in her 90th year. Marjorie Phyllis Ward was born June 12, 1929, the 5th daughter and 7th child, of Homer and Mary Ann Ward of Fargo, ND. She grew up in a houseful, at one time sharing a bedroom with five sisters in two double beds, while her three brothers were in the other bedroom on the second floor. With one bathroom serving the whole family, it made life interesting as they all got ready for church. Marjorie pursued a secretarial career working for a local dry goods store and Western Union until marrying Robert Houglum August 18, 1951. They moved to their farm at Flom, MN, where she lived for the next 25 years raising their family. Marjorie's life centered around God, church, family and friends all of her life as she pursued the Lord. One of her last requests was that her son, Dennis, read to her from the Gospel of John while she was in her hospital bed only a day or so before she passed. She is survived by her sons, John and his wife, Sharon, and Dennis and his wife, Debbie; daughter Rebekah; grandchildren, Kelly, Todd, Chase, Andrew, Kathleen and Katelynn; sister, Audrey; sister-in-law, Shirley; and a host of nieces, nephews, and friends from every season of her life. Marjorie was preceded in death by her parents; husband, Robert; brothers, George, Charles, and Lloyd; sisters, Bernice, Myrtis, Loretta and Helen; and a grandchild, Collin. The family requests that in lieu of flowers, charitable donations may be made in Marjorie's honor to one of two charities, either her family of faith, Grace Communion International, 3120 Whitehall Park Drive, Charlotte, NC 28273-3335 or the Care Pregnancy Resource Center, 1277 Main, Southaven. MS 38671 (Careprc.org) an organization dedicated to rescuing babies from abortion. A Visitation for Marjorie will be one hour prior to her service. Her Funeral Service will be Monday, October 28, 2019, at 12:00 PM, in Korsmo Funeral Chapel, Moorhead. Burial will take place in Audubon Cemetery, Audubon, Minnesota. (Korsmo Funeral Service, Moorhead, MN)

Marjorie P. Houglum, of Moorhead, MN, passed away in the early morning of Thursday, October 24, 2019, in Eventide on Eighth, Moorhead, in her 90th year. Marjorie Phyllis Ward was born June 12, 1929, the 5th daughter and 7th child, of Homer... View Obituary & Service Information

The family of Marjorie P. Houglum created this Life Tributes page to make it easy to share your memories.

Marjorie P. Houglum, of Moorhead, MN, passed away in the early...

Send flowers to the Houglum family.