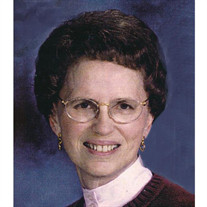 If you are unable to attend, Marjorie's service will be livestreamed at https://portal.midweststreams.com/services/watch/Y95c8v6436 Marjorie Ann Eliason (née Haley) passed away peacefully in the early morning hours of January 29, 2021, at the age of 90, with family by her side. The cause of death was complications related to multiple myeloma, a form of blood cancer. At the time of her death, she was living in the Waverly Gardens retirement community in North Oaks, MN. Marge was born on November 9, 1930, in southwestern MN and grew up on farms near Hoffman and Herman, MN. She was an excellent student and Valedictorian of her high school class. She met her husband, John David Eliason, while they were both attending Augsburg College in Minneapolis, MN. They married August 5, 1950 and spent most of their 58 years together in Fargo, ND. Marge was a homemaker who raised four children. After her children were grown she worked for ten years as the Volunteer Coordinator at Bethany Homes in Fargo. Along with John, Marge was an active member of Pontoppidan Lutheran Church in Fargo for decades. She loved nature and animals, from the kittens on the farm when she was a little girl, to her backyard birds in Fargo, to the bunnies she fed behind her apartment and multiple “grand-dogs” later in life. She loved flowers and her backyard gardens. She had an artistic side and dabbled in drawing, painting and photography over the years. Her cooking was legendary within the family, particularly her pies with homemade crusts. She had an inquiring mind and was always curious about the world, frequently sending her children and grandchildren newspaper clippings of articles she thought would interest them. She was a devoted and thoughtful friend and leaves behind several dear friends who meant the world to her. Marge adored her family, and she was never happier than when she was surrounded by her children, grandchildren, great-grandchildren, and their extended families. They will all keenly miss her presence at family gatherings, her jokes and stories, her hugs, her infectious smile, and the cards and notes from her that arrived without fail on birthdays and holidays. Marge was preceded in death by her husband John in 2008; a son, Ray Allan, who died shortly after birth in 1952; and by her brother, Jack; and two sisters, Doris and Janice. She is survived by son, John Barry Eliason (Sandra Hager Eliason), St. Anthony Village, MN; daughter, Patricia Ann Eliason (Thomas Peterson), Minneapolis; son, Randall Dean Eliason (Chérie Kiser), McLean, VA; daughter Peg Robertsen (Steve Robertsen), Silver Bay, MN; seven grandchildren, five great-grandchildren, and a number of nieces and nephews. A funeral service for Marge will be held Saturday, May 22, 2021, at 1 PM, in Pontoppidan Lutheran Church, Fargo. Marge requested that donations in her memory be made to either Pontoppidan Lutheran Church or Oak Grove Lutheran School, both Fargo.

If you are unable to attend, Marjorie's service will be livestreamed at https://portal.midweststreams.com/services/watch/Y95c8v6436 Marjorie Ann Eliason (née Haley) passed away peacefully in the early morning hours of January 29, 2021, at... View Obituary & Service Information

The family of Marjorie Ann Eliason created this Life Tributes page to make it easy to share your memories.

If you are unable to attend, Marjorie&#39;s service will be livestreamed...

Send flowers to the Eliason family.