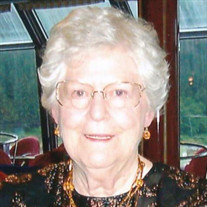 To join Marian's family for her funeral service via livestream, please click the following link: https://portal.midweststreams.com/services/watch/jr5Rbxb3vX Marian J. McIntosh, 95, of Fargo, ND, died Thursday, August 12, 2021, in Sanford Hospice House, Fargo, ND. Marian Joyce Wenger was born June 15, 1926, the daughter of Emil and Bertha (Greiner) Wenger, in Moorhead, MN. She was raised in Moorhead and graduated from Moorhead High School in 1944. After high school she attended business college in Iowa and then returned to Moorhead. On June 6, 1948, she was united in marriage to Robert C. McIntosh in Moorhead. They established their home in Moorhead where they opened the Moorhead Tastee Freeze in the mid 1950’s. Marian and Robert operated the Tastee Freeze until 1959 when they began leasing the business for many years. In 1969, they moved to a farmstead near Comstock, MN, and later returned to Moorhead in 1984. It was at this time Marian earned her Real Estate License and began selling real estate in the Fargo/Moorhead area. In 1997, they moved to Littleton, CO, until 2000, when they moved to Herman, MN. Robert passed away in 2005. Over the last number of years, Marian has lived in Minnesota and Colorado before settling at Bethany Assisted Living in Fargo. Marian had a strong and deep faith and was a member of Good Shepherd Lutheran Church in Fergus Falls, MN. No matter where she lived, she always found a place of worship to call home. She enjoyed cooking for people she loved and reading her Bible was an important part of her life. She is survived by her daughters, Mary (Dwight) Barnard, Elbow Lake, MN, and Lorene McIntosh, Fergus Falls, MN; grandchildren, Jason Barnard, James Barnard, Jennifer Wohlwend, and Robert (Kristi) Wohlwend, III; great-grandchildren, William Murillo, Noah Barnard, Ava Froseth, Tia Wohlwend, Robby Trainer, Robert Wohlwend, IV, and Ivy Marian Wohlwend; and by several nieces and nephews. She was preceded in death by her parents; husband, Robert; son, William; brother, Merle “Spike” Wenger; and sister, Luella Holmquist A Visitation for Marian will begin at 11:00 AM, Monday, August 16, 2021, followed her Funeral Service at 1:00 PM, in Korsmo Funeral Chapel, Moorhead, MN. Burial will be in Clara Lutheran Cemetery, rural Comstock, MN. (Korsmo Funeral and Cremation Service, Moorhead, MN)

The family of Marian J. McIntosh created this Life Tributes page to make it easy to share your memories.

To join Marian&#39;s family for her funeral service via livestream,...

Send flowers to the McIntosh family.