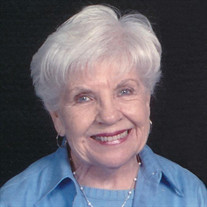 Lois J. Erdmann, 88, of Fargo, ND, formerly of Bismarck, ND, passed away on Monday, February 17, 2020, in Eventide Fargo, ND. Lois Jean Yellick was born August 8, 1931, in Milwaukee, WI, the daughter of Karl and Clara (Behm) Yellick. Lois was baptized and confirmed in Nazareth Lutheran Church, Milwaukee. She graduated from North Division High School in Milwaukee and went on to attend business college at Prospect Hall. She also took voice lessons at Wisconsin College of Music and Wisconsin Conservatory of Music. On April 14, 1951, Lois was married to Marvin E. Erdmann, in Nazareth Lutheran Church. The two made their home in Minneapolis, MN, for a few years before moving to Bismarck. They lived in Bismarck for over 40 years and considered it to be their home. Lois and Marvin were blessed with three children, Mark, Scott, and Kim. Lois enjoyed music and loved to read. She was also very active in the community. She had a passion for sharing the word of God and did so in numerous ways. She taught a Bible study called “Praise and Prayer” for 20 years in her home. She was involved in many organizations dedicated to serving God and the community such as: the Bismarck P.E.O group, WELCA, the board of Salvation Army, and as a speaker at Christian Women’s Club. Lois is survived by her three children, Mark (Karen) Erdmann, Scott (Ann) Erdmann, and Kim (Rick) Bergley; nine grandchildren; 14 great-grandchildren; siblings, Ralph (Carol) Yellick; and sisters-in-law, Marion Yellick and Ellie Yellick. She was preceded in death by her parents, Karl and Clara; husband, Marvin; siblings, Ted and Clyde Yellick; and three infant siblings. Arrangements by Korsmo Funeral Service

The family of Lois Jean Erdmann created this Life Tributes page to make it easy to share your memories.

Send flowers to the Erdmann family.