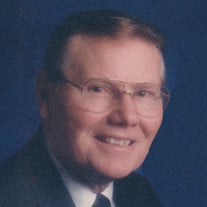 Lisle “Jim” Koch, 89, formerly of Pelican Rapid MN, died Monday, June 1, 2020, in Eventide on Eighth, Moorhead, MN. Jim was born April 19, 1931, the son of Arlie and Ruth (Linn) Koch. He was raised on the family farm and graduated from Willshire High School in Rockford, Ohio. Jim attended Lakeland College and Seminary in Sheboygan, WI, and later received master's degrees in both Psychology and Sociology from University of Kansas and University of Minnesota. On August 30, 1951, Jim and Dorothy Walters were united in marriage in St. Paul and moved to Judson, ND, in 1957. The moved to Kansas City, MO, in 1961 and then to Ellinwood, KS, in 1965. They later moved to Fergus Falls, MN, in 1978 and then to Lake Lida/Pelican Rapids, MN, in 1987. Over the years, Jim served as pastor and professor at Barton County JC in Kansas and Fergus Falls JC in Minnesota. Jim was a loving husband and father who enjoyed spending time in the outdoors, hunting, fishing, and rock hunting. Jim started his life mission at an early age, serving people in communities in the Midwest through religion and education. He was also instrumental in helping the disabled and mentally challenged through schools and camps. He was very active in the Civil Rights movement in Kansas City in the early 60s. Sixty years late,r the recent events weighed heavy on his heart, but Jim was an optimist and believed that the power of love would prevail. He is survived by his children, Lynn (Jane) Koch, Washington, IA, Mark (Connie) Koch, Pelican Rapids and Lisa Koch, Fargo, ND; grandchildren, Kyle (Aimee) Koch, Jenna Koch, Breanna Koch, and Brayden (Shannon) Koch; great-grandson, Dylan Kolar; brothers, Gene (Alyce) Koch, Charles (Janet) Koch; and sister, Janet (Don) Friedly. He was preceded in death by his wife and parents. Jim would have wanted to thank all the lives he was able to touch and be a part of over the years. Each of you helped him fulfill his dreams and lifelong mission. Jim and Dottie are united again in a better place. They are both deeply missed by their family and friends. They are both deeply missed by their family and friends Memorial may be directed to your favorite charity in Jim’s memory. Due To Covid-19 restrictions a Private Service for Jim will be held on June 5. His burial will be conducted at a later date in Elmhurst Cemetery, St. Paul, MN. (Korsmo Funeral Service, Moorhead, MN)

The family of Lisle James Koch created this Life Tributes page to make it easy to share your memories.

Send flowers to the Koch family.