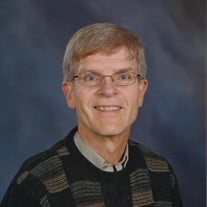 Larry Allen Halmrast, 64, of Fargo, ND, passed away Saturday, Feb. 29, 2020, in his home with family by his side, under the care of Hospice of the Red River Valley. Larry was born in Breckenridge, MN, on March 15, 1955, to Duane and Clarice (Wickoren) Halmrast. He grew up on a farm near DeLamere, ND, and attended school in nearby Milnor, ND, where he graduated from high school in 1973. Larry married Diana Schreiner in 1974, to that union Michael and Curtis were born. Larry worked for Bobcat in Gwinner, ND, for 25 years, and moved to Fargo, where he worked for Case New Holland for 21 years. Larry had a passion for watching, playing and talking about sports. He played and umpired softball for many years, including regional and national tournaments. He supported the NDSU Bison sports teams, and many other local and professional teams. Larry spent most of his free time visiting with family, friends and anyone with whom he could strike up a conversation. His dry sense of humor sometimes went unnoticed until you saw the glint in his eye. His favorite passion and greatest joy was sharing his love of sports, spending time and playing with his grandchildren. On May 27, 2015, Larry was married to Janet Fleming. Larry and Janet enjoyed attending various concerts in the area and expanding their palate with new experiences. They made their home in Fargo/Moorhead, most recently in Touchmark due to Larry’s battle with ALS. Larry is survived by his wife, Janet; sons, Michael (Laura) Halmrast, Goodyear, AZ, with grandchildren, Noah (friend Lacy), Sadye and Braden; Curtis (Sarah) Halmrast, Oakes, ND, with grandchildren, Mariska, Garett, and Lochlan; a brother, Arlin (Marisa) Halmrast, Lisbon, ND; a sister, Paula (Brian) Tayer, Milnor; nieces, Briana (Brandon) Spellerberg, Brooke (friend Gach Gach) Tayer, and Amber Halmrast; a nephew, Cole Halmrast; and many aunts, uncles and cousins. He was preceded in death by his parents. Memorials are preferred to the ALS Association of ND, MN, and SD at 1919 University Avenue W, Suite 175, St. Paul, MN 55104. Visitation for Larry will be Tuesday, March 3, 2020 from 5 PM to 6 PM, with a prayer service at 6, in Korsmo Funeral Chapel, Moorhead, MN. His funeral service will be Wednesday, March 4, 2020, at 11 AM in Triumph Lutheran Brethren Church, East campus, Moorhead, MN. A family burial will be in Immanuel Lutheran Cemetery, DeLamere, at a later time. Arrangements by Korsmo Funeral Service, Moorhead.

Larry Allen Halmrast, 64, of Fargo, ND, passed away Saturday, Feb. 29, 2020, in his home with family by his side, under the care of Hospice of the Red River Valley. Larry was born in Breckenridge, MN, on March 15, 1955, to Duane and Clarice... View Obituary & Service Information

The family of Larry A. Halmrast created this Life Tributes page to make it easy to share your memories.

Send flowers to the Halmrast family.