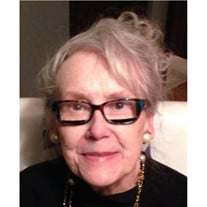 To view the recording of Judith's Celebration of Life Service please use the following link: https://portal.midweststreams.com/services/iframe/20430 Judith A. Hanson, beloved wife, mother, grandmother, sister, and guardian of the English language, died on Friday, May 21, 2021, at River Pointe of Moorhead, Minnesota, one day after disregarding the pain from her long battle with ataxia to raise her fist to the music, “I am woman, hear me roar.” She was 80. A native of Pembina, North Dakota, Judy married her junior high sweetheart, George Hanson, whom she first met when they were in the fourth and fifth grades. She helped raise twin daughters. She loved spending time with her six loving grandchildren. Judy had a superb vocabulary, but was not verbose. She always chose the most descriptive phrase for the situation, especially when talking about certain politicians. She had a quick wit followed by a quick smile. Her writing was creative and award-winning. She was named the Grand Forks Herald's Poet Laureate for her aptly titled piece “The Survivor,” a 57-word poem about the whistle of a train providing caution and comfort in a winter storm. As she did. She sent weekly letters to her children and grandchildren that included quips about the government going to “hell in a handbasket,” a comic strip and some spending money. She never missed special occasions and this past Christmas gave pinatas to her family to smash because the pandemic kept them apart. Judy never allowed life as a working mom to dictate her true passion of raising a family, tending to her garden and turning her humble home into a sanctuary. The garden was a place she got lost, especially among the irises. Judy and George's garden was the talk of the town. Judy was equally dedicated inside the home. Under the tutelage of her Grandma Reese, she was a talented seamstress, designing and sewing tablecloths, curtains, vanity skirts and household accessories, as well as dresses for the twins. She never wanted to look dowdy and was looking forward to a shopping spree with gift cards for her 80th birthday. Besides sewing, she crafted pristine embroidery pieces, a skill she taught herself along with cooking. She insisted on daily dinners at home, when the food and discussion went way beyond meat and potatoes. She served up rare delights like lasagna, stuffed pork chops, ribs, egg foo young and of course her famous enchiladas. It was also the time when the family talked and debated issues of the day. Judy instilled a belief that as three strong women they could do anything. The dialogue continued into the evening among friends of Deanne and Denise who gathered at the Hanson house while Judy made them all hot chocolate from real milk. Judy put up a brave fight against ataxia, which in the end made it difficult for her to speak the words that made her family happy. As evidence she was the coolest mom and grandma, during her last year she ordered food from DoorDash every day. She died at River Pointe surrounded by those she loved. Judith Johnston was born on May 12, 1941 and moved to East Grand Forks, Minnesota, at a young age. While in high school, she was an expert marksman in archery, won vocal competitions as a soprano, and was a drum majorette for the marching band. She and George were married on September 14, 1960. Judy studied English at Jamestown College and earned her degree from Northland Community and Technical College. Her strength in the job market was her work ethic and adaptability, serving as a jailer in the San Bernardino Sheriff’s Office and then, for most of her life, as a bookkeeper and office manager. In Northwood, North Dakota, Judy had the responsibility of pushing the button to alert the volunteer fire department to a call. Judy is survived by her husband, George Hanson, of Moorhead; daughter, Deanne (George) Ross of Frederick, Maryland; daughter, Denise (Dave) Kolpack of Fargo, North Dakota; grandchildren, Darren and Aylix Jensen, of Minneapolis, Minnesota, Andrew and Siri Bjornson, of Fargo, and Paige and Sydney Houghton, of St. Louis Park, Minnesota; sister, Cindi (Jay) Littlejohn of Forrest Lake, Minnesota; cousin, Barbara Davidson, of St. Louis Park; brother-in-law, Gordon Nylen of Irvine, California; and several nieces, nephews, grandnieces and grandnephews. She was preceded in death by her parents, Marguerite and Lloyd Johnston; and her sister, Patricia Nylen. A celebration of life ceremony is scheduled for 2 p.m. on Wednesday, June 2, 2021, at Mendenhall Presbyterian Church, East Grand Forks, MN. It will be livestreamed at korsmofuneralservice.com. In honor of Judy’s independent spirit, all funeral arrangements are taken care of, along with her cremation. The family requests that all memorials be directed to the National Ataxia Foundation at ataxia.org or Mendenhall Presbyterian Church, where George and Judy were married. (Korsmo Funeral and Cremation Service, Moorhead, MN)

The family of Judith A. Hanson created this Life Tributes page to make it easy to share your memories.

To view the recording of Judith&#39;s Celebration of Life Service...

Send flowers to the Hanson family.