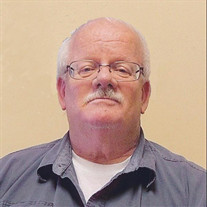 John Rote, 67, of Dilworth, MN, died Saturday, February 22, 2020, in Eventide on Eighth, Moorhead MN. John was born April 17, 1952 to Thomas D. Rote and Georgia Bernice Williams Rote in Pueblo, Colorado. John graduated from South High in Pueblo, and later served in the Air Force during the Vietnam War. After discharge his employment included working in Pueblo at the Pueblo Nature Center and serving as a law enforcement officer in the Dallas, TX, area. After moving to Dilworth he worked for Anda Apartments and later as a building manager for The Church of Jesus Christ of Latter-day Saints in Fargo, ND. He retired in 2019. John was married twice. Both marriages ended in divorce. John is survived by his partner, Michele Hanson, and her son, James Hanson; a brother, Thomas (Patricia) Rote of La Vergne, TN; nieces and nephews, Rebecca (Alan) Tolbert of Petal, MS, Michelle Tusler of Longmont, CO, Glenn (Krystal) Rote of Deer Trail, CO, Michael Rote of Loveland, CO, Christopher Rote of Gulfport, MS, Jason (Leah) Rote of Madison, TN; along with seven grand-nephews and eight grand-nieces. John will be greatly missed by his many friends and by members of his church family. He loved keeping the church buildings in top condition. Even after his retirement, he quietly took it upon himself to paint the interior hallway walls of the Fargo church building. He had a unique since of humor and loved to post memes and videos on Facebook. A memorial services will be held Friday, February 28, 2020 at 3:30 PM in The Church of Jesus Christ of Latter-day Saints, Fargo, ND. Should friends desire memorial contributions can be made to the Alzheimer’s Foundation or the American Cancer Society. Arrangements by Korsmo Funeral Service.

The family of John B. Rote created this Life Tributes page to make it easy to share your memories.

Send flowers to the Rote family.