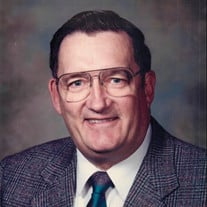 James “Jim” Kempel, 85, Fargo, ND, died Wednesday, November 18, 2020, in Eventide, Fargo. Jim was born January 7, 1935, in his grandparents’ home in rural Gardar, ND, to Jacob “Jake” and Elsie (Walters) Kempel. He grew up in Wales, ND. After graduating from Wales High School, Jim enrolled in Refrigeration Systems at North Dakota State School of Science in Wahpeton, ND. Following trade school, Jim’s career started in Fargo and eventually went to Bridgeman Refrigeration in Thief River Falls, MN. While in Thief River Falls, Jim joined the MN National Guard, made lifelong friends and met his future wife, Kay Sunderland. Jim was united in marriage to Kay in Milton, ND. They started their family, welcoming a son, Michael. In 1966, he started Midwest Refrigeration in Grand Forks. In 1971, he moved back to Fargo to teach at Moorhead Area Vocational Technical Institute. (M State) In 1973, he started Dakota Refrigeration. Jim enjoyed many years outdoors, fishing on Lake of the Woods, waterfowl hunting in the Wales area, deer hunting all over North Dakota. He picked up the sport of trapshooting and became very good, winning trophies at all levels throughout the country. He was the North Dakota Handicap Champion and won the Doubles Championship multiple times at the North Dakota State shoot. He is enshrined in the North Dakota Trapshooting Hall of Fame. But more importantly, made friends from all corners of the earth. His outdoor activities were curtailed by a stroke in 2016 and he has lived at Eventide in Fargo for over 4 years. He was preceded in death by his wife, parents and his dog, Eddie. He is survived by his son, Mike and his wife Sherry; two grandchildren, Kyle and Anna Kay. He is also survived by one sister, Marilyn Kram-Borho; along with nieces, nephews, brothers-in-law and many friends. The Kempel family would like to thank the staff at Eventide in Fargo, for the wonderful care he received, even though he was your toughest customer some days. Jim trusted and appreciated your care over the 4.5 years he was at Eventide.

The family of James W. Kempel created this Life Tributes page to make it easy to share your memories.

Send flowers to the Kempel family.