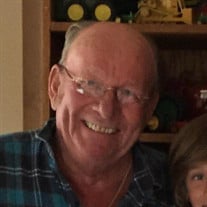 To view Jim's funeral service via livestream on Thursday, January 6, 2022 at 2pm, please follow the link below: https://portal.memoryshare.com/memoryshare/videoplayer/jamesl-gunderson-8121785 Jim Gunderson, age 77, formerly of Dilworth, MN, died on Tuesday, December 21, 2021. Jim, the son of Johnny and Mayme Gunderson, was born on December 21, 1944, in Sharon, ND. Jim and his family moved from Cooperstown, ND to Mahnomen, MN, in 1950. He graduated from Mahnomen High School in 1963. Jim spent two years in the U.S. Army from 1965-1967. Jim married Penny Kurtti in January of 1966. He worked for Gateway Building Systems for 50 years, retiring in 2014. Jim lived in Dilworth since 1969. Jim is survived by his sister, Donna Johnson; his three brothers, Raymond (Barb), Stanley, and Dale (Merry) Gunderson; his four sons, LeRoy (Barbara), Vern, Terry (Tanya), and Ted (Shanna) Gunderson; 10 grandchildren; 7 great-grandchildren; and numerous nieces and nephews. He was preceded in death by his parents; a sister, Sharon Johnson, who died in 2021; and his sister-in-law, Bev Gunderson (Stanley’s wife), who also died in 2021. The graveside service for Jim will be at the Riverside Cemetery in Mahnomen on Thursday, January 6, 2022, at 10:30 AM, followed by a memorial service at Korsmo Funeral Chapel, Moorhead, MN, at 2:00 PM. (Korsmo Funeral and Cremation Service, Moorhead, MN)

The family of James L. Gunderson created this Life Tributes page to make it easy to share your memories.

To view Jim&#39;s funeral service via livestream on Thursday, January...

Send flowers to the Gunderson family.