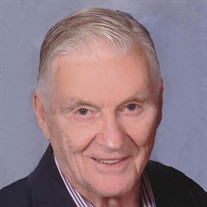 James Peter Gotta, legendary Moorhead High School coach and beloved father, grandfather, and friend, peacefully passed away Saturday, May 30, 2020, surrounded by family at the Moorhead, MN, home of his son and daughter-in-law. He was 93. Jim was born May 2, 1927, to Joseph and Linda Gotta in the upper peninsula of Michigan in the small town of Bessemer. As a young boy he moved to nearby Ironwood where he and his three brothers, Joe, Jocko and Jerry, were raised. Growing up amidst The Great Depression in his Italian-Finnish home, Jimmy learned to be resourceful, hardworking and self-sufficient. Influenced by his once pro football player father, along with his brothers and a band of neighborhood boys, Jim's love of sports and his natural athleticism was evident as a young boy and remained throughout his life. Jim spent the summers of 1944 and 1945 as a Seaman in the U.S. Coast Guard, going on to serve in the U.S. Navy in the fall of 1945 where he was stationed in The Great Lakes. In August of 1946, he was honorably discharged to attend Moorhead State Teachers College (now MSUM), accompanied by three of his longtime friends from Ironwood. On and off the football field, basketball court, and track, Jim thrived as a Dragon. He was named the Northern Intercollegiate Conference Most Valuable football player, was all-conference in basketball and, in track, broke the NIC high jump record with a leap of 6 feet, 2 ½inches. He was named the 1940s Athlete of the Decade for the Dragons, and in 1972, was inducted into the Dragons Hall of Fame. It was at MTC where Jim met his sweetheart and future wife, Fern Ottoson. They shared 64 years together until Fern's passing in 2014. In 1951, as newlyweds, Jim and Fern both taught in Casselton, ND, and it was there Jim began his coaching career. In 1953 he was recruited by Moorhead and started his 33-year tenure as a history teacher and what would become his illustrative coaching career. Jim and Fern embraced Moorhead as their home and it was here they raised their five children, Linda, James, Susan, Joe and Jay. In 1956, Jim was named head football coach at Moorhead and his incomparable mix of warmth, dedication and fierce competitive spirit would lead his athletes to victory again and again. From 1956 - 1976 as the head football coach, Jim had a .843 winning percentage with five unbeaten seasons. In 1971, Moorhead was named the mythical state champion by the Minneapolis Tribune. In 1972, when the playoff system for high school football began, Moorhead took a 26-game winning streak to the old Metropolitan Stadium in Bloomington for the state championship game against Minneapolis Washburn. The Spuds would come up short losing 26-8. Jim's coaching career received statewide recognition, and in a 1974 interview with the Minneapolis Tribune, he noted, "The sport I favor above all others is football. But I love track; I really do. It seems to kind of grow on you that doggone track." Jim's track teams won four state track championships (1967, 1968, 1972 and 1973), and claimed 27 regional track titles over the course of his 33-year tenure. In 1974, Moorhead Mayor Dwaine Hoberg declared May 9th "Jim Gotta Day," for Coach Gotta's contributions "to the welfare of young people and the entire community." In 1982 he was inducted into the Minnesota High School Football Coaches Hall of Fame. One of his greatest honors came in 2001 when the new Moorhead Spuds football stadium became "Jim Gotta Stadium.” Some of his proudest moments were watching his three grandsons play football at the stadium named in his honor. Jim made a profound and lasting impact on his student athletes, maintaining close relationships with many of them to the end of his life. Jim cherished his retirement years on Big Pelican Lake where he and Fern regularly welcomed guests and created an abundance of treasu red memories for their family. He enjoyed hunting and fishing with his three sons, visiting his daughters in Texas and Colorado, and supporting his grandchildren by attending their many activities and sporting events. Working away on his expansive yard, ensuring all was tip-top, became a source of pride. After Fern's passing, he took great joy in maintaining her picturesque floral gardens to lovingly honor her memory. Jim's gregarious personality, generous heart, humor, and captivating storytelling brought joy to all who knew him. Of all his life achievements, his most significant were his profound love and commitment to his family, and ultimately, his faith in Jesus Christ which, in his later years, became a deep source of comfort and strength. He spoke often of being reunited with Fern in Heaven along with other loved ones who had gone before him. Jim was preceded in death by his parents, his wife, Fern, and his brothers, Joe and Jocko. He will be lovingly remembered by his five children: Linda (Jim) Ahlfors of San Antonio, TX, James (Robin) Gotta of Sartell, MN, Susan (Don) Metzger of Colorado Springs, CO, Joseph (Mary) Gotta of Moorhead, and Jay (Beth) Gotta of Bismarck, ND; 21 dearly loved grandchildren; 12 great-grandchildren; and his brother, Jerry (Irene) of Sacramento, CA. Due to Covid-19 restrictions, a private family service will be held on June 13, 2020, at 4PM in Lake Eunice Cemetery, Detroit Lakes, MN. Memorials may be sent to the Moorhead Legacy Education Foundation Fund, P.O. Box 1006, Moorhead, MN 56560. Memories and condolences may be shared at the online guestbook: www.korsmofuneral service.com

James Peter Gotta, legendary Moorhead High School coach and beloved father, grandfather, and friend, peacefully passed away Saturday, May 30, 2020, surrounded by family at the Moorhead, MN, home of his son and daughter-in-law. He was 93. Jim... View Obituary & Service Information

The family of James P. Gotta created this Life Tributes page to make it easy to share your memories.

Send flowers to the Gotta family.