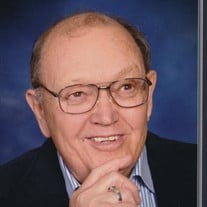 To view Jerry's service via livestream, please follow the link below: https://online.atonement.live/ Gerald (Jerry) Willis Beyers of Fargo, ND passed away on Thursday July 29, 2021, in Fargo, ND at the age of 84. Jerry was born on December 11, 1936, to Erwin and Leona Ella (Lindenburger) Beyers in Bathgate, ND. Jerry attended high school in Wahpeton ND. On October 8, 1955, Jerry married Delores Ann Barnum in Foxhome MN whom he was married to until she passed on March 6, 2015. Jerry and Delores raised two sons Terry, Timothy (Tyler) and one daughter Tamara (Tammy). Jerry married Gloria Ann Schuster on October 14, 2015, in Beatrice, NE. Gerald was a very dedicated husband, very loving and generous. He helped with everything; cutting the lawn, loved to cook and even helped me wash dishes. Each child was very special to him, each had unique personalities. He loved them all including grandchildren and great grandchildren. He loved to play cards on Wednesdays and Saturdays; Pitch, Rummy and Pinocle, and whenever we were with his sisters Darlene and Betty. We traveled to many franchise owner’s locations across the United States and made visits to Mexico with the franchisees. His ABC Seamless franchisees and employees meant the world to him, and he wanted everyone happy. They were all so dedicated to Gerald. Jerry had many successful occupations throughout his lifetime. He worked with his father who owned an implement dealership in Shelley MN before farming with his father-in-law for many years. He also owned a pizza shop in Breckenridge MN, did custom combining throughout the Midwest, owned Green Giant Landscaping, worked at Siouxland Beef for four years and started ABC Rental Agency Service in 1970. In 1973 he started his home-based business ABC Services and Construction. He turned ABC Services and Construction into the ABC Seamless Siding Corporation in 1978. Jerry developed and built the machines and attachments used to install seamless steel siding, soffit, fascia, and gutters. He then franchised the ABC Seamless system throughout the United States. In 1995 he was honored as North Dakota’s first franchisor, and he was inducted into the North Dakota Entrepreneur Hall of Fame. ABC Seamless continues to operate in Fargo and is supported by many longtime employees and franchisees. Jerry is preceded in death by father Erwin, his mother Leona Ella, first wife Delores Beyers, daughter, Tammy and sister, Gladys Donofro, brothers-in-law, Donald Barnum, Tom Donofro and son-in-law, Kurt Chaput. He is survived by wife Gloria; sons, Terry (Julie) Beyers and Tyler Beyers; grandchildren, Josh (Mary Beth) Bauman, Jenna Beyers, Jamie Beyers, Broc Beyers (Fiance Kendra), Sarah (Dustin) Hoffner, Jesse Beyers, Cory (Nicole) Chaput and CynDee (Richard) Smith; nine great-grandchildren; sisters, Darlene Thompson and Betty Parr; sisters-in-law, Evonne Barnum and Joyce Larson; brother-in-law, James Schuster; stepsons, Grant (Kelly) Herzog and Jason Martin Herzog, along with many nieces, nephews and his ABC Seamless family. Gerald’s visitation will be held Wednesday, August 4, 2021, from 5-7 pm at Atonement Lutheran Church 4601 South University Drive, Fargo ND 58104. Funeral Service will be Thursday, August 5, 2021, at 11:00 am also at Atonement Lutheran Church. Arrangements entrusted to Korsmo Funeral and Cremation Service, Moorhead, MN Online condolences may be shared at: www.korsmofuneralservice.com

To view Jerry's service via livestream, please follow the link below: https://online.atonement.live/ Gerald (Jerry) Willis Beyers of Fargo, ND passed away on Thursday July 29, 2021, in Fargo, ND at the age of 84. Jerry was born on December... View Obituary & Service Information

The family of Gerald W. Beyers created this Life Tributes page to make it easy to share your memories.

To view Jerry&#39;s service via livestream, please follow the link...

Send flowers to the Beyers family.