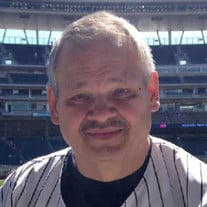 Gerald J. Barnes, 68, of West Fargo, ND, formerly of Casselton, ND, died Sunday, April 26, 2020, in his home surrounded by his family, under the care of Hospice of the Red River Valley. Gerald Jerome Barnes was born May 17, 1951, the son of John and Lucy (Turchin) Barnes, in Fargo, ND. He was raised in Casselton where he attended school. He later graduated from the North Dakota Police Academy in Bismarck, ND. Gerald then made his home in Casselton where he began his police career in 1974. On October 13, 1984, he was united in marriage to Marilyn Kieffer at St. Leo’s Catholic Church in Casselton. They made their home there where Gerald served as Chief of Police until 1990. In 1990, Gerald went to work for the Cass County Jail in Fargo where he served as a correctional officer until 2009. He then worked at various schools in the Fargo/Moorhead area as a custodian. Gerald enjoyed long drives, especially trips around North Dakota and Minnesota taking the back roads and scenic routes. He also enjoyed baseball and the Minnesota Twins, sauerkraut and just about anything pickled, polkas and caring for his pets and cats. Most importantly, Gerald had a great love for his family and taking care of them. He will be dearly missed by his wife, Marilyn; children, Jason Barnes, Jannel Barnes and Shane Barnes, all West Fargo; brother, George (Jackie) Barnes, Jamestown, ND; sisters, Gloria (Dale) Idso, Casselton, and Debbie Barnes, Fargo; sisters-in-law, Elaine Barnes, Ames, IA, and Mary Barnes, Fargo; and several nieces, nephews, and cousins. He was preceded in death by his parents and brothers, James, Richard, Conrad and Peter. Private Services for Gerald will be held, and a Celebration of Life will be held later this summer. Burial will take place in St. Leo’s Catholic Cemetery, Casselton. (Korsmo Funeral Service, Moorhead, MN)

Gerald J. Barnes, 68, of West Fargo, ND, formerly of Casselton, ND, died Sunday, April 26, 2020, in his home surrounded by his family, under the care of Hospice of the Red River Valley. Gerald Jerome Barnes was born May 17, 1951, the son... View Obituary & Service Information

The family of Gerald J. Barnes created this Life Tributes page to make it easy to share your memories.

Send flowers to the Barnes family.