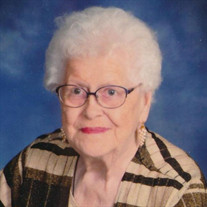 Frances E. Finger was born June 5, 1928, in Averill, MN, the third of five children, to Hjalmer and Gina (Korum) Anderson. In her teen years, Fran and her sister, Virginia, worked at the Fairmont Creamery in Moorhead, MN, processing eggs for the war effort. After the war she met Venoie “Laddie” Lattimore at the Merry-Go-Round Club in Sabin, MN. They were married November 30, 1946. Venoie and Fran had four children, Dennis in 1948, Roger in 1952, Steven in 1956, and Rebecca in 1958. In the 1960’s, Fran worked at the first Stop-N-Go, on 10th street north in Fargo, ND. She later managed the Stop-N-Go in Moorhead, and later worked at Hornbachers. Venoie passed away in 1968. Fran spent many years doing volunteer work at the VA hospital in Fargo. Fran was blessed to find love again. She met Frederick “Fritz” Finger at the ND State American Legion convention. They were married October 15, 1988. Fritz joined Fran at the VA, and together they were honored as the Volunteer Couple of the Year, for their service. In 1996, Fran received the Volunteer of the Year award. Fran had volunteered more than 10,000 hours at the VA. Fritz passed away in 2000. Fran lived in her home in north Moorhead for nearly 70 years. She was a charter member of Our Savior’s Lutheran Church. Fran is survived by her sons, Dennis (Candee) Lattimore, Candee’s daughter, Shari Cichon, Shari’s son, James (Katrina) and their daughter, Alizabeth; and Steven (Peg) Lattimore. She is also survived by Rebecca’s daughter, Manda (Nate) Cornell, and their children, Meghan, Riley and Mason Moore, and Isabella and Bentley Cornell; Rebecca’s son, Cory (Drea) Cullen, and their daughter, Avery. Also surviving is a step-son, Allen (Rita) Finger, and their four children, Sarah (Mitch) Bender and their children, Caleb and Rules; Marianne (Bob) Carek and their children, Cadence and Joshua; Michelle (Tristan) Poper and their son, Wilder; and Joel Finger; a step-daughter, Jean Anne (Mike) Frykman, and their children, Catherine Dahl and her child, Elizabeth, Bonita Frykman, and Anne (Eric) Kerzman; a sister-in-law, Bette Anderson; and numerous nieces and nephews. She was preceded in death by her two husbands, Venoie and Fritz; a son, Roger, who died in 1956; her daughter, Rebecca, who died in 1994; and by four siblings, William, Virginia, Clayton, and Richard. A gathering of friends will be held on Thursday, October 22, 2020, from 6 PM until 7 PM, with a life celebration service at 7 PM, in Korsmo Funeral Chapel, Moorhead. Frances' Service will be livestreamed at the link below: https://portal.midweststreams.com/services/watch/oJ3T3xkuzK (Korsmo Funeral Service, Moorhead, MN)

Frances E. Finger was born June 5, 1928, in Averill, MN, the third of five children, to Hjalmer and Gina (Korum) Anderson. In her teen years, Fran and her sister, Virginia, worked at the Fairmont Creamery in Moorhead, MN, processing eggs for... View Obituary & Service Information

The family of Frances E. Finger created this Life Tributes page to make it easy to share your memories.

Send flowers to the Finger family.