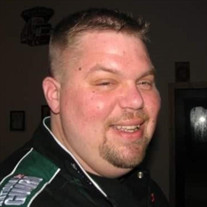 Eric E. Erickson, 43, of Moorhead, MN, passed away on October 16, 2021, in Essentia Health, Fargo, ND. Eric Ernest Erickson was born on August 26, 1978, to Eugene and Susan (Froemming) Erickson, in Moorhead. Eric grew up and went to school in Ulen, MN, graduating from Ulen-Hitterdal High School in 1997. Eric held many jobs over the years, but the one that he felt the most achievement from was his position as the maintenance manager at Shooting Star Casino. His job there allowed him to visit with everyone and just be the social butterfly that he was. On August 13, 2021, Eric was united in marriage to Heather McCain and made their home in Moorhead. Eric was a huge Vikings and Bison football fan. He enjoyed talking to everyone about the teams, or anything people would talk with him about. He also enjoyed going to car shows but most of all he enjoyed the time spent with his friends and family. He had a special place in his heart for his niece and nephew. Eric was preceded in death by his parents, Eugene and Susan; step-mother, Delores Svare his grandparents; one niece and one nephew. He is survived by his wife, Heather; sister, Necole (Mason) Dodds; nephew, Tate Moses; niece, Skryra Erickson; father-in-law, Shawn (Renata) McCain; mother-in-law, Darla McCain; brother-in-law, Shannon McCain; sisters-in-law, Ashley and Emily McCain; many cousins, aunts, and uncles. A visitation will be held for Eric, on Monday, October 25, 2021, from 11AM to 1 PM, in Korsmo Funeral Chapel, Moorhead, MN. The funeral service will be held, Monday, October 25, 2021, at 1 PM, in Korsmo Funeral Chapel.

The family of Eric E. Erickson created this Life Tributes page to make it easy to share your memories.

Send flowers to the Erickson family.