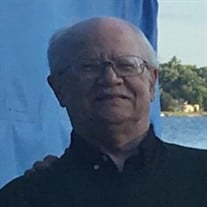 Enson Lee Maattala was welcomed into the arms of his Savior, the Lord Jesus Christ, on August 21, 2020. Enson was born to Leo and Aurlette (Axeness) Maattala on July 28, 1947. He attended Moorhead (MN) State College Campus High School and graduated 1965 Valedictorian class of the Baby Dragons. While a student, he played clarinet in the band, participated in basketball, track, government declamation and newspaper reporting. Following high school, he attended Concordia College, Moorhead, and graduated 1969, when he joined the Peace Corps serving in Lesotho, South Africa. He was an Agricultural Extension Agent during this time. He maintained letter relationships with people from Lesotho for years following his return to America. Upon returning to the USA, he attended the University of Denver Law School where he studied Judicial Administration, graduating with a Masters Degree in 1975. Following this, he took and passed continuing education courses in accounting, business administration, computer schools, and sociology at MSUM and Moorhead Community Education Dept. Enson had a variety of jobs. He moved to Fargo, ND, and worked one year as the Clay (MN) County Clerk of Court's Assistant. Then he moved to Minneapolis, MN, to work as a nursing home nurse's assistant, bookbindery helper, and at the Sears Company Credit Department as a clerk. He moved back to Fargo to drive taxicab for the Doyle Checker Cab Company. Moving to Moorhead, he worked as an office clerk-typist. In 1984, he moved to Anoka, MN, to work as a word processor, factory assembler, and bookkeeping clerk. He moved to Library, PA, to live with a brother-in-law's family. In 1993, he moved to Rochester, MN, to work as a Woolworth Store janitor, then to Owatonna, MN, to work as a janitor and factory assembler. In 1998, he wrote and published the booklet, "Students Guide to Finding the Right College." In 2002, he moved back to Moorhead where he worked as a convenience store cashier, Immigrants and Newcomer's non-profit charity information clerk, then as a history data clerk and janitor for Experience Works, Inc., F-M newspaper carrier, Walmart store people greeter. In 2013, he began work as warehouse stock clerk for Heartland Industries, Inc., Moorhead, for six years. His confirmation Bible scripture memory verse was Galatians 2:20. Enson was preceded in death by his parents, Mr. & Mrs. Leo and Aurlette Maattala; and a brother, Mr. Cyd Maattala. He is survived by his siblings, Mrs. Jethe (John) Custer, Mrs. Rea (Richard) Sliper and Mr. Daro Maattala; and several neices and nephews. Visitation will begin at 10 AM, with a Life Celebration Service at 11 AM, Friday, August 28, 2020, in Korsmo Funeral Chapel, Moorhead. Reverend Richard L. Sliper will conduct the memorial service for Enson Lee Maattala.

Enson Lee Maattala was welcomed into the arms of his Savior, the Lord Jesus Christ, on August 21, 2020. Enson was born to Leo and Aurlette (Axeness) Maattala on July 28, 1947. He attended Moorhead (MN) State College Campus High School and graduated... View Obituary & Service Information

The family of Enson Lee Maattala created this Life Tributes page to make it easy to share your memories.

Enson Lee Maattala was welcomed into the arms of his Savior,...

Send flowers to the Maattala family.