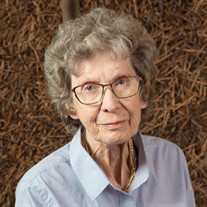 Ednabelle “Edde” Kuehl, née Groothuis, 87, passed away Saturday, March 28, 2020, in Edgewood Vista, Fargo, ND. Edde was born on June 30, 1932, on a farm outside Clara City, MN. She graduated from Montevideo (MN) High School in 1950. After graduation, she worked at the state hospital in Willmar, MN, and then spent time in Torrance, CA, making bullets during the Korean War. She also worked at Northwestern Bell in Fargo, Insurance Company of North America in Minneapolis, MN, Warner Insurance Company in Fargo, Pioneer Seeds, the Census Bureau, the Moorhead School District, and as a child caregiver. She married Duane Kuehl on July 1, 1974, in Sioux Falls, SD. She was a longtime resident of Moorhead, MN, and loved her home and community. She also loved a wide variety of needle crafts, but especially quilting. She took pride in hand-piecing and hand-quilting her quilts. She served as the president of the Quilters Guild of North Dakota in the mid-1980s and spent many years as part of the quilting circle at Our Redeemer Lutheran Church, Moorhead, where one of her quilts hangs today. Edde is survived by her daughter, Julie Kuehl (Rob Mountain), Fargo; her grandsons, Kyle Rodriguez and Taylor Rodriguez, both Moorhead; sisters, Arleen Bussian, LaCrosse, WI, and Carol Groothuis, Crystal, MN; brother, Robert Groothuis, New Hope, MN; and several sisters-in-law and brothers-in-law. She also leaves behind scores of nieces, nephews, friends, and her “adopted” granddaughter, Jennifer Wiese. She was preceded in death by her parents, William and Marie (Uttermark) Groothuis; her husband, Duane Kuehl; her brother, Leo Groothuis, and infant brother, Lyle Groothuis; her sisters, Eleanor Stager, Lola Kranz, Phyllis Kranz, Mary Kawell, and Julene Howard; as well as several sisters-in-law and brothers-in-law. Memorials may be directed to Hospice of the Red River Valley, in memory of Edde Kuehl. Their care and concern when it was needed was truly a godsend. Private family services will be held with a memorial service to be held at a later date. Interment will be in Prairie Home Cemetery, Moorhead.

The family of Ednabelle "Edde" V. Kuehl created this Life Tributes page to make it easy to share your memories.

Send flowers to the Kuehl family.