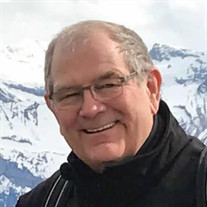 Dr. Gerald Kiedrowski, age 72, of Fargo, ND, died Saturday, October 23, 2021, in Sanford Health, Broadway, Fargo. Gerald Alan Kiedrowski, the son of Francis and Helen (Josephs) Kiedrowski, was born July 4, 1949, in Minneapolis, MN. He grew up and graduated Valedictorian from high school in Richfield, MN. He attended and graduated from the University of Minnesota, both with his bachelor’s degree and his medical degree, which he received in 1976. In 1975, Jerry married Wendy J. Noack. Following his graduation, they moved to Big Fork, MN, where he practiced medicine. They later moved to the Fargo-Moorhead area, where Jerry practiced medicine at St. Luke’ s Hospital, as well as several other hospitals and clinics. On December 11, 1993, Jerry was united in marriage to Marilyn (Gilbertson) Holder at Kensington, MN. They made their home in Lake Park, MN, and Jerry continued to practice medicine in the Fargo-Moorhead area. In 1999, Marilyn and Jerry moved to St. Cloud, MN, where Jerry practiced medicine in an urgent care department. In November of 2015, they returned to Fargo to live. Jerry practiced both at the VA Hospital in Fargo and continued to serve in St. Cloud at the CentraCare Clinic. Jerry held faith and family close to his heart. His faith in Jesus was expressed in his church activity, mission trips, Bible studies, and by his active participation in the Gideons International ministry of Scripture distribution. His family, including his deeply loved grandchildren, was at the core of his life. He loved attending their events and having family activities. He and Marilyn conducted the much loved “Grandma camp” for their grandchildren. The grandchildren always enjoyed trying to stump grandpa with an unusual animal to be a part of his famous “Jane stories”. He enjoyed fishing and hunting, especially bow hunting, with family and others. He and Marilyn had a mutual love for travel including trips to Switzerland, Germany, and several other countries. Jerry was fascinated by the languages of these countries and spoke a number of foreign languages, which also helped him in his medical practice. Jerry is survived by his wife, Marilyn; five children, Megan (Kurt) Espelien, Moorhead, MN, Christian Kiedrowski, Moorhead, Joseph (Billie) Kiedrowski, Fargo, Greta Guscette, West Fargo, ND, and Ingrid Kiedrowski, Moorhead; three stepchildren, Christa (Vitaly) Rubstein, Switzerland, Dan (Michelle) Holder, West Fargo, and Joe (Chrystal) Holder, Fargo; one brother, Tom (Barb) Kiedrowski, Maple Grove, MN; and 27 grandchildren. Memorials are preferred to Gideons International, to purchase Bibles for distribution. The funeral service for Dr. Gerald Kiedrowski will be Friday, Oct. 29, 2021, at 10:30 AM, in Bethel Evangelical Free Church, Fargo. Visitation will be one hour prior to the service, at the church. Jerry will be buried near Kensington, MN. His funeral will be livestreamed at: https://boxcast.tv/view/gerald-kiedrowski-funeral-october-29th-2021-171804

The family of Dr. Gerald A. Kiedrowski created this Life Tributes page to make it easy to share your memories.

Send flowers to the Kiedrowski family.