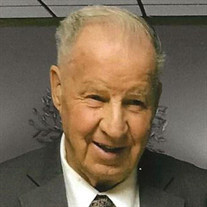 Donald E. Gunderson, 87, of Moorhead, MN, died July 31, 2020, in Sanford Medical Center, Fargo, ND. Donald Ervin Gunderson was born August 14, 1932, the son of Clarence and Flossie (Bulson) Gunderson, in Twin Valley, MN. He was raised in the Twin Valley area where he attended country school and graduated from Twin Valley High School in 1951. Donald worked various jobs until August of 1952, when he entered the U.S. Army, serving during the Korean Conflict. Donald was united in marriage to Helen Hogenson on March 13, 1953, in Tacoma, WA. A few days later, he was deployed to the US Air Force Base in Tachikawa, Japan. His new bride sometimes referred to their first year of marriage as “a piece of cake!” In mid-1954, he was honorably discharged, with the rank of corporal. Following his service, he returned to Moorhead, where he worked at Harry A. Simon & Sons as a furniture maker until 1964. Subsequently, he went to work at the Moorhead Public Service Department’s Power Plant, working various jobs and retiring as an Operating Engineer in 1992. After retirement, he enjoyed many summers at their lake home on Big Cormorant Lake and spent several winters in Boulder City, NV. He was a longtime member of Our Savior’s Lutheran Church in Moorhead, the Moorhead VFW and American Legion, the Sons of Norway and the Fraternal Order of Eagles in Fargo. Don enjoyed following the Minnesota Vikings and Twins, reading books, especially those authored by Louis L’Amour, listening to country music, making lefse, and mowing/snow blowing with his John Deere tractor. He also enjoyed traveling and spending time with his family and grandchildren. The lake home was an incredibly special place for Don, where he enjoyed many gatherings with family and friends, along with the beauty and sounds of Mother Nature. He is survived by his wife of 67 years, Helen; children, Keith (Darlene) Gunderson, Moorhead, Kent (Annette) Gunderson, Kalispell, MT, Kristopher Gunderson, Horace, ND, and Kimberly Gunderson, Dilworth, MN; grandchildren, Andrew (Julie), Mark, Erin, Lauren, and Kaitlyn Gunderson; great-grandchildren, Eric and Gretta Gunderson; sister, LaVonne Miller, Ada, MN; sisters-in-law, Phyllis Gunderson, Cambridge, MN, and Mavis Gunderson, Dilworth, MN; and many nieces and nephews. He was preceded in death by his parents; brothers, Carroll, Leland, and Mearl; brother-in-law, Daryl Miller; parents-in-law, Alvi and Inez Hogenson; in-laws, Harris and Maudie Hogenson, Genella and Allan Fuglie, Doloris and Loyal Busby, Joyce and Russell Borgen, Clair and Deloris Hogenson. Memorials may be directed to Our Savior’s Lutheran Church, Moorhead, or a charity of your choice. Don’s family and friends will gather to celebrate his life Wednesday, August 5, 2020, with a Visitation from 5:00 PM to 6:30 PM, followed by a Prayer Service at 6:30 PM in Korsmo Funeral Chapel, Moorhead. Due to the CDC’s COVID-19 restrictions, social distancing and masks will be required. His Graveside Service will be Thursday, August 6, 2020, at 11:00 a.m., in Moorhead Memorial Gardens, Moorhead. PRAYER SERVICE video: please follow this link to watch the prayer service for Don: https://youtu.be/Q8CzokZmKtU

The family of Donald E. Gunderson created this Life Tributes page to make it easy to share your memories.

Send flowers to the Gunderson family.