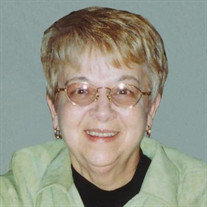 DeEtta Y. Weber, 78, of West Fargo, ND, died Wednesday, September 22, 2021, in her home. DeEtta Yvonne Birch was born August 28, 1943, the daughter of Olaf “Ben” and Georgia (Ringler) Birch. She was raised in Elizabeth, MN, where she attended grade school and graduated from Fergus Falls (MN) High School. DeEtta married Dennis Praska and together they raised three children. They lived in Oakes, ND, and Fergus Falls, MN, before they settled in the West Fargo-Fargo area in ND. Over the years DeEtta work various jobs in the F-M area and especially enjoyed her years working for KinderCare in West Fargo. DeEtta’s grandchildren were her prized possessions and she loved spending time with them. She also enjoyed reading. Teri: Mom was always up for any outing that involved her grandkids; such a wonderful Grandma. She would pick Drew up from the bus each day after school to drive him a block home. I cherish the memories of our little road trips to Storybook Land after stopping at the casino to eat and gamble (and she usually won). During Drew’s first few years of hockey she would boast that she was the only grandparent that hadn’t missed a game. We will miss her frequent calls and how they always ended with an, “I Love You.” Mark and Sheri: Mom always would come up with unique ideas out of the blue, but one that sticks out to me the most was when she asked me for a pedal bike with a low seat height so she could ride it. I looked and looked for one that would work and got it for her. She loved it and would talk about her bike to anybody that would listen. About a month or two passed and I said how's the bike, and she replied great. I had a feeling from previous conversations that she had never ridden the bike up to this point. I was coming home from the lakes on a Sunday, and it was one of the windiest days I can remember, I pull down the block of my house and I see her riding down the middle of the street. Her hair was blown all over and she was exhausted at this point. I know she was going to ride the bike to my house just to show me she was using it and getting her exercise. I laughed and she did too. After a water break and conversation. I gave her a ride home. That same bike never left the garage after and the funny part is about 6 months ago I asked if I could take the bike to my house to use, she replied, “No I may use it.” LOL. Sheri remembers, DeEtta was known by many as Grandma DeeDee. It was truly her calling and she made the children around her feel so special. I imagine her watching over so many that it’s now her full-time job. I loved that part of her. Keith and Bonnie: One of Keith's favorite memories of his mom was how her eyes would light up when we'd bring the grandkids to visit. She'd always had to make sure they took home some little thing from her, much to the dismay of their parents. Bonnie remembers, of course the shenanigans she and I use to get into, like the Boone's farm wine drinking out of DQ cups. We've had many laughs over that one. She is survived by her children. Keith (Bonnie) Praska, Alexandria, MN, Teri (Paul) Praska-Albrecht, Fargo, and Mark (Sheri) Praska, West Fargo; grandchildren, Jayme (Kate) Praska, Melissa (Jeremy) Murphy, Justin (Anna) Praska, Paeton Praska and Drew Albrecht; great-grandchildren, Jacob, Emma, and Adison Murphy, and Austin, Carter and Alli Praska; honorary grandson, Dominic Robideau, West Fargo; nephew “like a son,” Curtis Praska, Fargo; dear friend, Bob Ciak, West Fargo; sisters, Karen (James) Olson, Lakeville, MN, Connie Steiner, Oakes, and Sally (Chas) Day, Dundas, MN; sister-in-law, Laverne Birch, Fergus Falls; along with several nieces and nephews. She was preceded in death by her parents; and brothers, Larry and Dony Birch. A private Graveside Service for DeEtta will be held in Inman Cemetery, rural Deer Creek, MN. (Korsmo Funeral and Cremation Service, Moorhead, MN)

The family of DeEtta Y. Weber created this Life Tributes page to make it easy to share your memories.

Send flowers to the Weber family.