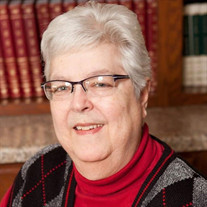 Debra A. Jacobson, 68, of Fargo, ND, passed away on Sunday, March 29, 2020, in Bethany on University, Fargo. Debra was born January 12, 1952, to David and Donna (Strommen) Jacobson, in Fargo. She graduated from high school in 1970, and went on to attend Minnesota State College, where she graduated in 1974. Debra had the opportunity to student teach at the American School of Las Palmas in the Canary Islands, Spain. During that time abroad, she traveled all over Europe. She even managed to visit Italy despite the area being closed to visitors at the time. After completing her education, Debra became a teacher in the Ada-Borup school district. She taught elementary school in the Borup (MN) School for her whole career, of over 30 years. Debra was very interested in genealogy. She volunteered at the Norman Country Historical Society. If someone had a question about the family history of anyone in Norman County, she had the answer, or knew how to find it. There was never a puzzle involving genealogy that she wouldn’t work to solve. Norman County has lost a living history book. Debra is survived by her brother, Kent (Karen) Jacobson; two nieces, Tammy (David) Keenan, and their children, Kristin (Austin) James and Alyssa (Eric) Brendemuhl, and Heather (Mark) Donnelly, and their children, Landen, Addison Boedy, and Everly; and a great-great-nephew, Reagan James, Kristin and Austin’s son. She was preceded in death by her parents, David and Donna, and niece, Michele Trandem. Due to the corona virus, no service will be held. A private family gathering will be held later in the summer for her burial. Arrangements by Korsmo Funeral Service, Moorhead, MN.

The family of Debra A. Jacobson created this Life Tributes page to make it easy to share your memories.

Send flowers to the Jacobson family.