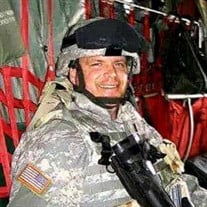 David L. Colemer Jr., 50, Moorhead, MN, died unexpectedly, Monday, September 21, 2020, at Essentia Hospital, Fargo, ND. David Leroy Colemer Jr. was born April 22, 1970 in Hibbing, MN, to David and Marge (Dropps) Colemer. He attended school in Chisholm, MN, graduating in 1988 from Chisholm High School. After school he enlisted in the Army National Guard. David proudly served our country for 26 years. His military career/education and deployments took him away from his family many times during the seven years he served overseas. While overseas, David crossed the pond to Norway, Bosnia, Iraq and Kuwait in both peace and war times. While in Iraq, he worked on the Mitt which was both a difficult time and a great experience. In between deployments, David worked as a supervisor for UPS for 20 years and retired as a On Car Supervisor. In 1989, David met Krista Atkinson, and they were united in marriage on July 11, 1994. He furthered his education attending college at Hibbing Community College, NDSU, MSUM and St. Mary’s in Bismarck. In the early 2000’s, David rose through the Army ranks, primarily working in military intelligence. During his final deployment in 2013, David was injured while overseas. Upon returning home, he was eager to get back to normal civilian life but was forced into early retirement due to the severity of his injuries. Josh and Krista travelled to St. Louis via Red Cross for David’s neck surgery. David attended the Wounded Warrior Transition program. While in Utah, the Wounded Warrior Project reached out to David and he soon became a peer support leader. Being part of this group was instrumental for David’s healing process. He was very giving of his time and talents, as he soon became active with the Wounded Warrior Project, running local events in the FM area, aligning programs for other wounded veterans and being the listening ear and friend to many. He was also an Army recruiter, visiting and speaking at many high schools throughout Minnesota and North Dakota. He was active with Fishing with Vets, Hometown Heros, the VFW and the Rough Grouse Society. In his spare time, David enjoyed spending time at their lake home near Perham, fishing, tinkering on small engines and automobiles and loved watching movies. His proudest moments in life were being the best Dad, and his ability to help others. David was a brave and proud solider and we are a proud military family. David will be remembered and missed by his wife, Krista, of Perham, MN, and their children, Josh, Jordan and Jax. He is also survived by three sisters, Shanna (Troy) Humphries, Cheryl (Todd) Crippen, Crystal (Matt) Hassal; his parents, David and Marge Colemer; along with many nieces and nephews. A Celebration of Life will be held Friday, October 2, 2020, at 2PM in First Lutheran Church, Fargo, ND. A gathering of friends and family will be held one hour prior to services on Friday.

The family of David L.Colemer Jr. created this Life Tributes page to make it easy to share your memories.