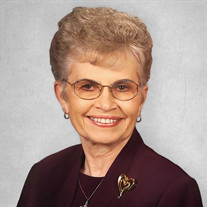 Darlene P. Todd, Hendrum, MN, passed away Friday, September 13, 2019, at the age of 87, in the care of Hospice of the Red River Valley at the home of her daughter and son-in-law, Micki and Rick Antoine in West Fargo, ND. Darlene Phyllis Anderson was born January 22, 1932, in Moorhead, MN, at her aunt Nellie’s home, to Joe and Ethel (Moe) Anderson. She was the oldest of 10 children. Darlene grew up on the farm, learning to milk cows and do everything else that farm kids ‘got’ to do. She attended her first years of school in Perley, MN, and completed her education in Hendrum, graduating from high school in 1950. While in eighth grade, Darlene won the Norman County spelling competition, allowing her a trip to the state bee in Minneapolis, MN. She enjoyed being part of Hendrum’s cheerleading team during her high school experience. Her greatest accomplishment was marrying her classmate, Tommy Todd, December 22, 1952, at Kirkebo Lutheran Church in Perley, while he was on a six-day leave from the Army. They spent two years living in Oklahoma while he was serving in the military. Upon returning from Oklahoma, they first stayed with Tommy’s parents, then lived in an apartment in Fargo, ND, for a few months. After a short time living in California, where Tommy was employed, they returned to the Perley-Hendrum community, making their home on her parents’ farm. Their first home was in a little trailer house adjacent to her parent’s farmhouse. Later they built their ‘forever home’ next door to that of her mom and dad on the farmstead. Tommy and Darlene became the parents of five children; three sons – Dwight, Mike, and Brad and two daughters – Terri and Michele “Micki.” Darlene was an avid seamstress sewing clothing of every kind for her husband and children. She often worked until the wee hours of the morning on one project or another. Up until her passing, she was making hand and machine-quilted quilts for her grandchildren with Tommy’s assistance. Together with the help of Tommy and her children, she did canning or freezing of all kinds of food – fruit, vegetables from their large garden, even chicken - another of her gifts that she used to bless her family and others. She will be remembered for the great Sunday family dinners that she and Tommy served. Mom was a baker of amazing cakes which she crafted for family and friends. Weddings, graduations, confirmations, birthdays, baptisms and many other special events were often graced by one of her beautiful, tasty works of art. While health issues kept her from traveling in later years, she and her husband were able to visit Florida, Washington State, Oregon, California, and the Southwest on several occasions. Darlene was active in Landstad Lutheran Church of rural Perley for many years teaching Sunday School, serving in the Ladies Aid women’s group, and quilting with the church quilters. Upon the closing of that congregation, she and Tommy became part of Triumph Lutheran Brethren Church in Moorhead. They are so grateful for the ministry of the pastoral and parish nurse care they have received from that congregation, especially as her health declined in recent years. Darlene is survived by her husband, Tommy, of nearly 67 years, and their five children, Dwight, Terri (John) Helland, Mike, Brad (Kristie) and Micki (Rick) Antoine. Missing her presence are 14 grandchildren, April (Jim Golden), Ryan (Amber), Derek (Becky) Todd and Ashley (Marzel) Harris; Tony, Nikki and Cody Todd; Alisha (Jeff) Lynch, Brandon (Becca), Joe and Mikalya (fiancé Ben Gordon) Todd; Amber (Skyler) Jackson, Adam Aarestad and John (Rachel) Antoine; her beloved great-grandchildren, Dylan & Jordan Malmlov, Ledger, Lake, Nellie, Idella and Lincoln Todd, Azaela Harris, Ariah Aus, and Gabe Antoine; seven of her nine siblings, Alice Dosland, Irene Mathison, Carol (DuWayne) Lydeen, Donald ‘Skip’ Anderson, Gladys (Allan) Richards, Linda Magnuson and Marlys Guttormson; as well as many nieces and nephews. She was preceded in death by her parents; brother, Lloyd Leroy (in infancy); sister, Diann Renshaw; daughter-in-law, Debbie Todd; granddaughter, Heidi Helland; one sister-in-law, Trecie Anderson; and five brothers-in-law, Larry Renshaw, Thor Dosland, Richard Mathison, Earl Magnuson and Andy Guttormson. Memorials are gratefully preferred to the American Cancer Society or Hospice of the Red River Valley. Visitation for Darlene will be take place at Korsmo Funeral Chapel in Moorhead, on Wednesday, Sept. 18, 2019, from 5:00 – 7:00 pm. A prayer service will follow at 7:00 p.m. The funeral service for Darlene will be held at Triumph Lutheran Brethren Church in Moorhead, on Thursday, September 19, 2019, at 2:00 pm.

Darlene P. Todd, Hendrum, MN, passed away Friday, September 13, 2019, at the age of 87, in the care of Hospice of the Red River Valley at the home of her daughter and son-in-law, Micki and Rick Antoine in West Fargo, ND. Darlene Phyllis Anderson... View Obituary & Service Information

The family of Darlene P. Todd created this Life Tributes page to make it easy to share your memories.

Send flowers to the Todd family.