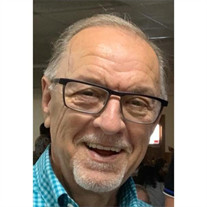 D.L. "Swede" Stelzer, 73, of Moorhead, MN, died Thursday, November 11, 2021 in Essentia Health, Fargo. D.L. “Swede” Stelzer was born December 28, 1947, to Ervin and Jane Stelzer in Comfrey, MN. The family later moved to Welcome, MN, where Swede attended High School along with his three younger sisters. The son of a WWII Navy veteran, Swede enlisted in the US Air Force, becoming a B-52 Comm/Nav technician. Swede met his wife Linda Kocher while stationed at Grand Forks Air Force Base and they were married in 1967. Swede deployed to Thailand in 1968 for the Vietnam War. After his Honorable Discharge, Swede attended NDSU while working as property manager for two rooming houses owned by family members. He then worked as a technician for Morningside TV repair until he purchased his own TV repair shop and the young couple settled in Wishek, ND. In addition to running his business, Swede entered community service early serving as a part-time police officer, training as one of the first EMT’s in rural North Dakota, serving in the Drum and Bugle Corps, and becoming the youngest American Legion Commander in North Dakota. Following the birth of their sons, Wade (1971) and Troy (1972), Swede took a job as a sales rep for Berko Electric in 1975 and the young family moved to Fargo, ND. 1978 saw the family moving to Moorhead, MN, and Swede changing jobs to Markel Products Corp. The family joined St. Francis de Sales Catholic Church and enrolled the boys in their primary school. With the birth of their daughter, Sarah, in 1981, the family was complete. Swede became a leader in the community, first by serving on the St. Francis de Sales School Board and later becoming the President of the School Board. Swede always kept informed on the community needs and declined a promotion and a move to Nashville to take the position as the Director of Economic Development for the City of Moorhead, which he held for 10 years. Following his son’s graduation from Moorhead Sr. High School and enlistment in the US Air Force (Wade) and US Navy (Troy), Swede returned to the private sector as the CFO for Maintenance Engineering. The ensuing years saw Sarah graduate from Moorhead Sr. High and Swede continued his community involvement and volunteered countless hours in many capacities at St. Francis de Sales Catholic Church. Swede sang bass in the church choir, as well as helping Linda make the annual Pascal Candle for over 35 years. Following his retirement in 2011, Swede volunteered even more at his church and eventually became the Administrative Coordinator for the Parish. When the church’s roof collapsed in 2019, Swede took on the role of project manager and led the successful rebuild effort, which enabled the church to reopen for in-person Mass in 2020. This event prompted Swede and his good friend Bob Seigel to learn how to broadcast church services over the internet for the congregation, which enabled the congregation to attend virtual Mass during the COVID 19 Pandemic. Swede will be deeply missed and is survived by his wife, Linda, of 54 years; his sons, Wade (Misty), Troy (Mara); daughter, Sarah (Jeremiah) Powell; 5 grandchildren, (Emma, Isaac, Caine, Rowan, and Neilah); his sisters, Sandie (Dan) Tish, Peggy Godden, and Lori (Nolan) Posivio; as well as numerous brothers and sisters in-law and extended family members and friends. He was preceded in death by his grandparents; parents, Ervin and Jane; uncles, Ivan Finstad and Vince Stelzer; as well as his sister Peggy’s husband Curt Godden. In Lieu of flowers memorial donations may be made to Disabled American Veterans (DAV). A visitation will be held on Tuesday, November 16, 2021, from 5 – 7 PM with a prayer service at 7 PM, in St. Francis de Sales Catholic Church, Moorhead. Swede’s Mass of Christian Burial will be held Wednesday, November 17, 2021, at 11 AM, in St. Francis de Sales. Arrangements entrusted to Korsmo Funeral and Cremation Service, Moorhead, MN.

The family of D.L. "Swede" Stelzer created this Life Tributes page to make it easy to share your memories.

Send flowers to the Stelzer family.