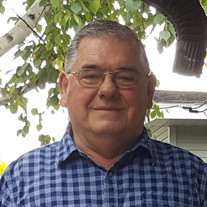 Conrad P. Barnes, 75, of Casselton, ND, died Saturday, February 15, 2020, following a valiant fight against cancer in Eventide on Eighth, Moorhead, MN. Conrad Paul Barnes was born, July 29, 1944, the son of John and Lucy (Turchin) Barnes in Fargo, ND. He was raised in Casselton where he attended school and then went to work at the Casselton Grain Elevator. On June 24, 1967, he was united in marriage to Sherian Mischke, in St. Henry’s Catholic Church in Leonard, ND. They established their home in Casselton. Conrad then went to work at Interstate Seed and Grain in Fargo as an over-the-road truck driver. On March 15, 1975, his life would change dramatically when he was injured at work and received extensive brain and nerve damage. Although the next number of years were extremely difficult at times, his faith and determination were what carried him through. A man of kindness, love, patience and compassion, Conrad’s next mission in life was to be the ultimate caregiver. Over the years he helped care for many family members, helping with their needs and taking them shopping or to appointments when needed. He was a lifelong member of St. Leo’s Catholic Church in Casselton. Conrad loved sports and enjoyed watching many games over the years. He especially enjoyed going to Central Cass football and basketball games over the last 50 years. A diehard Green Bay Packer fan, his dreams were made reality in 2012 when he spent a weekend in Green Bay, touring Lambeau Field and attending a game with his son and Godson. Another great enjoyment was food; Conrad was a man who never passed up a snack and especially a good meal or any meal for that matter. Most importantly, Conrad loved his family. Always there to support them in anyway he could, whether it be cheering them on, giving comfort, or showing his unconditional love for all. He was a man who never met a stranger and would visit with anyone who would take the time to talk for a while. He will be dearly missed by his children, Sherry Barnes, Moorhead, and Conrad J. (Sharon Hendrickson) Barnes, Fargo; grandchildren, Sheldon Barnes, Fargo, Jon (Abbey) Beaumont, Neenah, WI, and Kassie (Sean Szuberski) Beaumont, Grand Forks, ND; Godson, Mark (Jamie) Lewis, East Bethel, MN; brothers, Gerald (Marilyn) Barnes, Fargo and George (Jackie) Barnes, Jamestown, ND; sisters, Gloria (Dale) Idso, Casselton and Debbie Barnes, Fargo; sisters-in-law, Elaine Barnes, Ames, IA, and Mary Barnes, Fargo; and several nieces, nephews, and cousins. He was preceded in death by his parents; wife, Sherian on July 17, 2017; and brothers, James, Richard, and Peter. A Visitation for Conrad will be Sunday, February 23, 2020, from 5:00 PM to 7:00 PM with a 6:30 PM, Prayer Service in St. Leo’s Catholic Church, Casselton. His Mass of Christian Burial will be 10:30 am, Monday, February 24, 2020, in St. Leo’s Catholic Church. Burial will take place next to his beloved wife, Sherian, in St. Leo’s Catholic Cemetery, Casselton. Online guestbook at www.korsmofuneralservice.com (Korsmo Funeral Service, Moorhead, MN)

The family of Conrad P. Barnes created this Life Tributes page to make it easy to share your memories.

Send flowers to the Barnes family.