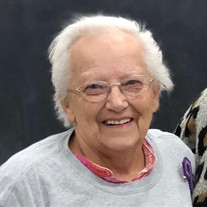 Avis Irene Pearson was born on May 14, 1936, in Rothsay, MN, to Herman and Dorothy (Barringer) Martinson. Avis was one of 13 children who lived on the Martinson family farm. She often helped with chores around the farm and worked cleaning houses for some of the neighbors. The family moved to Pelican Rapids, MN, in 1947, where Avis graduated from Pelican Rapids High School in 1954. Avis married John Pearson on June 29, 1958, in Pelican Rapids. John, Avis, and the boys moved to Sabin, MN, and then to Moorhead, MN, where they continued to make their home. Avis and John were members of The Lutheran Church of Christ the King in Moorhead. Over the years, Avis worked at Dakota Hospital, St. Ansgar’s Hospital, Head Start, and Fargo Public Schools. She also spent much of her time as a homemaker and daycare provider for kids in Sabin. In her spare time, Avis adored spending time with her family. Whether she was gardening, baking, hosting tea parties, playing board games, cheering grandchildren on in sports or plays, attending sister weekend and Martinson Christmas, or just sitting down to chat, she never passed up an opportunity to be with her loved ones. Avis also enjoyed dancing with John, word finds, playing cards, country music, and watching the birds and squirrels come by her bird feeder. Avis had kept in touch with many friends throughout the years, including attending regular lunches with her graduating class, former neighborhood friends and coworkers. Avis died surrounded by family on Thursday, July 22, 2021, at age 85, in Eventide Care Center under the care of Hospice of the Red River Valley after a difficult battle with breast cancer. Avis is lovingly survived by her sons, Mark (Debbie) Pearson of Moorhead, David (Ilene) Pearson, of Moorhead, and Scott (Kim) Pearson of Lakeville, MN; seven grandchildren, Sarah Meza, Elizabeth (Tyler) Forsgren, Daniel (Alyssa) Sullivan, Chandler Pearson, Hannah Pearson, Abbie Pearson, and Jonas Pearson; two great-grandchildren, Sebastian Meza and Mariska Meza; sisters, Delores Monson, Linda (Leroy) Miller, Connie (Vernon) Wifall, Carol (Duane) Haiby, Marlene (Don) Matz, Judy Grahn; brothers, Larry (Anita) Martinson, Marvin (Winnie) Martinson, and Morris (Marlene) Martinson. Avis was preceded in death by her parents, Dorothy and Herman Martinson; her husband, John Pearson; son, Gary Pearson; sister, Elaine Sneva; brothers, Donald and Herbert Martinson; and a number of aunts, uncles, in-laws, and cousins. Visitation for Avis will be held Monday, July 26, 2021, in Korsmo Funeral Chapel from 5pm – 8pm. Funeral Service will be Tuesday, July 27, 2021, at 11am in The Lutheran Church of Christ the King, Moorhead. Following the service, Avis’s family is inviting those in attendance to join them for a luncheon.

Avis Irene Pearson was born on May 14, 1936, in Rothsay, MN, to Herman and Dorothy (Barringer) Martinson. Avis was one of 13 children who lived on the Martinson family farm. She often helped with chores around the farm and worked cleaning houses... View Obituary & Service Information

The family of Avis I. Pearson created this Life Tributes page to make it easy to share your memories.

Send flowers to the Pearson family.