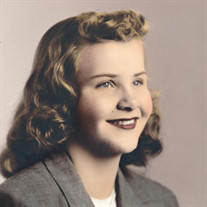 Audrey C. Oliver, 89, of Dilworth, MN, died Saturday, September 18, 2021, at Woodland Lodge Enhanced Assisted Living in Fergus Falls, MN, under the care of hospice. Audrey was born on October 26, 1931, the daughter of Benard and Josephine (Urness) Hoaby. She grew up in Fargo, ND, until marrying Tom Oliver on November 20, 1948. They made their home in Dilworth where she was quickly immersed into the Italian traditions and lived in Little Italy during their early years of marriage. Here she perfected her Italian cooking and homemade raviolis. Tom and Audrey had three children. After moving to the north side of Dilworth, Audrey started working at the Dilworth Public School as a dietary aid and later as head cook. She worked there for 34 years until retiring at the age of 72. Audrey and Tom were members of St. Elizabeth’s Catholic Church in Dilworth and were actively involved – especially when it came time for the famous spring and fall spaghetti dinners. Audrey was the salad lady for those events until the age of 82. Her family of ten siblings helped to keep the Norwegian traditions alive as well with large family gatherings and coffee parties. Audrey was preceded in death by her husband, Tom; son, Marc; grandson, John; her parents; sisters, Barbara and Joette; brothers, Benjamin, Wilford, and Wesley; and brothers-in-law, Harold Unruh and Hank Schroeder. She is survived by children, Teresa (Curt Gullickson) Olivieri, Underwood, MN, and Victoria (Chuck) Ritchie, Asheville, NC; daughter-in-law, Diane Olivieri, of Hudson, WI; seven grandchildren and soon to be ten great-grandchildren; sisters, Kathy (Harvey) Bruse, Clara (Elmer) Mueller, Sandi (Jimmy) Reynolds, Lila Unruh, and Beverly Schroeder; brothers-in-law, Gene Frisco and Joe Olivieri; sister-in-law, Anna Zeuli; and many nieces and nephews. A funeral mass will be held for Audrey, on Saturday, October 2, 2021, at 2 PM, in St. Elizabeth Catholic Church, Dilworth, with a visitation one hour prior. Burial will be at St. Joseph’s Catholic Cemetery, Moorhead, MN, following the service. Arrangements entrusted to Korsmo Funeral and Cremation Service, Moorhead, MN

The family of Audrey Claire Oliver created this Life Tributes page to make it easy to share your memories.

Send flowers to the Oliver family.