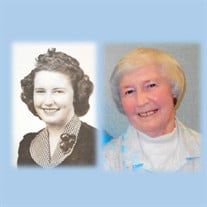 Audrey I. Jensen, 91, of Moorhead, MN, died Friday, September 27, 2019, in Elim Rehab and Care Center in Fargo, ND. Audrey Ileen Eid was born August 3, 1928, the daughter of Isaac and Alma (Moe) Eid, in Skree Township (near Barnesville), MN. Audrey grew up on the farm with a love for animals and graduated from Barnesville High School in 1945. Near the end of WW2, she began correspondence with her cousin’s (Mickey (Rude) Jensen) husband’s younger brother, Donald M. Jensen, serving in Europe during the war. This relationship continued after his discharge in late 1945 and they were married on February 1, 1947. They established and continued to make their home in Moorhead through the years. Audrey was a dedicated homemaker devoted to her family. She was the primary caregiver for her husband during the last years of his life until he died, January 9, 2018, at the age of 93. He passed just before their 71st anniversary. She was a quiet and reserved person but became close friends with her neighbors and always enjoyed the company of family and friends. Audrey is survived by her two children, Donald D. (Francesca) Jensen, La Grange, KY, and Diane M. (Ron) Roscoe, Moorhead; three grandchildren, Cassandra Foley, Portland, OR, Dustynn (Billy) Quiggle, Fargo; and Lynsey Roscoe, Moorhead; step-grandchild, Staci (Aleksander) Perkins-Surla, London, England; and three great-grandchildren. She was preceded in death by her parents; husband, Donald M. Jensen; brother, Stanley O. Eid; and grandchild, Shawn G. Jensen. Visitation from 5 - 7 PM, with a funeral at 7 PM, Tuesday, October 1, 2019, in Korsmo Funeral Chapel, Moorhead.

The family of Audrey Jensen created this Life Tributes page to make it easy to share your memories.

Send flowers to the Jensen family.