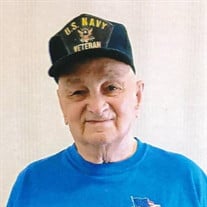 Anthony (Tony) Joseph Chalupnik, Junior Until we meet once more: Here's wishing you a happy voyage home. ~ from Anchors Aweigh Anthony Joseph Chalupnik, Junior, was born on August 21st, 1934, to Anthony Chalupnik and Rosalie (Karsky) Chalupnik in New Hradec, ND. The family moved to Graceville, MN, where Tony grew up and attended parochial school. He joined the U.S. Navy in 1952 and served in the Korean Conflict. While in the San Francisco Group – Pacific Reserve Fleet, Tony served aboard the U.S.S. Mitchell and the U.S.S. Randall as a Boatswain Mate. He was honorably discharged in 1956 and went on to pursue a career in auto mechanics. Tony was married on June 23, 1959, to Georgianne Stein in Chokio, MN. He is survived by his wife, Georgianne, and his children James (Jennifer), Jenny, Jan Marie (Shawn) Johnson, and Jill (Kris) Johnson. He enjoyed spending time with his family, especially his four grandchildren: Lauren and Jacob Chalupnik; and Madison and Jack Chalupnik Johnson. Tony was very proud to be a lifetime member of the American Legion and the VFW. He served as a Commander Adjutant of the local American Legion Post 253 in Lowry, MN. Civic duty was important to Tony: he served as a volunteer fire fighter, member of the city council and Fire Chief in Lowry. Tony had many hobbies including playing pinochle, bowling, and fishing. He was also an avid fan of John Wayne movies as his wife and children can attest. He was known for having an easy laugh and a warm personality. One of Tony’s cherished experiences was going on the 2019 Honor Flight to Washington, DC, where he and other military veterans were honored. Tony passed away on Monday, April 26th, 2021 at Sanford Hospital in Fargo, ND. He will be greatly missed by his family and friends.

The family of Anthony J. Chalupnik Jr. created this Life Tributes page to make it easy to share your memories.

Anthony (Tony) Joseph Chalupnik, Junior
Until we meet once more:...

Send flowers to the Chalupnik family.