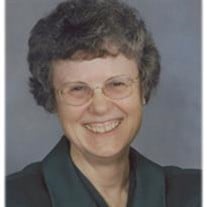 Anne (Boyce) Fredine, 68, Moorhead, MN, died on Dec. 1, 2012, in her home. She was born Nov. 1, 1944, in Waterbury, CT, to Homer Jay Boyce and Mabel (Cobb) Boyce. In time her family moved to S. California where Anne graduated from Canoga Park High School in 1962. Through the influence of pastors, teachers, and churches, she became a loving follower of Jesus. She next attended Wheaton College and studied anthropology preparatory to missionary service. Following graduation in 1966 she completed additional linguistics training and joined Wycliffe Bible Translators. She then went to their Jungle Camp and learned primitive living skills, which she used in serving the Tzeltal people of the Yucatan Peninsula. April 28, 1968, Anne married Richard E. Fredine, then a 2LT in the US Army. Following military service they moved to New Brighton, MN, where Anne enrolled in the School of Library Science of the University of Minnesota. Following her graduation in November 1974, she worked in both the Bethel Seminary library and the Medtronic, Inc. corporate library. The couple moved to Nashua, IA, in October 1975, where Richard pastored a small church. Anne joined the staff of the Nashua Public Library and in time became the librarian. Later she served the libraries of the wider area as part of the Northeast Iowa Regional Library System. In 1987 Anne and her husband came to Moorhead, where Anne began 25 years of service to the community as Director of the Moorhead Public Library. Under her leadership, the library automated its systems, underwent a major expansion and multiple remodelings. In March 2011, Anne became the Assistant Director of the Lake Agassiz Regional Library (LARL) and extended her influence to support library service to the wider area. Anne was a passionate advocate of the necessity of public libraries for the successful and just functioning of democratic societies. Under her leadership her loyal staff enhanced the reputation of the library as a valuable, accessible, user-friendly resource. Anne was a “friend of our community.” At the time of her death, Anne was a member of the Salem Evangelical Free Church and before that the Moorhead Evangelical Free Church. In both congregations she both gave and received much love. Anne was widely recognized as an avid and skilled gardener, and enjoyed few things more than “having my hands in the dirt.” Better yet was if she could simultaneously be listening to a talking book. Over her lifetime Anne shared deep affection with numerous dogs, beginning with Duke and ending with her beloved Curlique. She also kept treats at hand and in pocket to share with the dogs of friends. In February 2011, Anne was diagnosed with metastatic colon cancer. With grace and acceptance she underwent a long course of chemotherapy. She retired from LARL in July 2012. Anne continued treatment, gradually reducing activities as her strength waned. For a short period she was bedfast, but continued happily receiving friends until the morning of her death. Anne and her family were was especially grateful for the loving care of the Essentia Medical Oncology staff. Anne was preceded in death by her mother and her father. She is survived by her husband, Richard; her brothers, John (Chaluthong) of Houston, TX, and Richard (Cindy) of Washington, DC; nieces and nephews, Karen (Rodney) Snider of Grand Junction, CO, Bonnie (John Malinzak) Boyce, of Simi Valley, CA, Avery Boyce of Washington, DC, Elliot Boyce of Washington, DC; cousins and many cherished friends and church family. Visitation will be 5PM to 8 PM on Wednesday with a brief service at 7PM at Korsmo Funeral Chapel, Moorhead. Funeral will be 11 AM Thursday, Dec. 6, 2012, at the East Campus of Salem Evangelical Free Church, 1111 30th Av S., Moorhead. A lunch will follow. Burial will be on December 10, 2012, in Scranton, PA, overseen by the Strauck Funeral Home. Memorials to benefit the Moorhead Public Library can be sent to the Anne Fredine Memorial Fund, LARL, 118 5th St. S., Moorhead, MN 56560.

The family of Anne Fredine created this Life Tributes page to make it easy to share your memories.

Send flowers to the Fredine family.