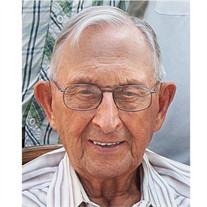 Alfred T. Deutscher, 91, of Moorhead, MN, died Wednesday, April 14, 2021, in Bethany on University, Fargo, ND. Alfred Theodore Deutscher was born to Edward and Aneta (Reister) Deutscher on July 7, 1929, in the village of Burstall, Saskatchewan, the third of their six children. He was baptized in the Reformed Church. While Alfred was just a toddler, the family moved to Streeter, ND, where they worked a small farm and Alfred grew up and attended school. After high school he worked for a time as a carpenter in Jamestown, ND. After an uncle told him that the Northern Pacific Railroad was hiring, Alfred applied for a job. He was hired in Dilworth, MN, as a locomotive fireman; his job was shoveling coal into the firebox. Two years later he was drafted into the Army and trained at Camp Lejeune, NC. He served in Korea as a locomotive engineer on the Korean National Railroad. Alfred returned home and married Deloris Schumaker on April 10, 1955. To this union were born three sons: David, Douglas, and Dean. The family settled in Dilworth and later moved to Moorhead. Alfred worked for 42 years on the Northern Pacific and Burlington Northern Railroads. He retired in 1991. He spent the next 30 years having coffee every morning with his buddies at The Fryn’ Pan Restaurant where he says they talked about tractors, farming, bees, bats and lying to each other. He also found time to work on his farm raising cattle, growing vegetables, operating a small gravel pit, and restoring all things mechanical: old tractors, old cars, old clocks and watches. He volunteered at the Steam Threshers Reunion in Rollag, MN, each year—as well as the Lake Region Threshers in Dalton, MN. He loved volunteering to peel carrots and potatoes for the Streeter Buffalo Supper. Alfred and Deloris spent their winters in Apache Junction, AZ. He is survived by his wife of 66 years, Deloris; by his sons, Dave, Doug, and Dean; his grandchildren, Benjamin, Joseph, and Emily; his brothers, Bill and Wesley; and many nieces, nephews, and a whole host of dear friends. He was preceded in death by his parents; his sister, Lydia; and his brothers, Walter and Reinhold. Remembrances may be made to The Lutheran Church of Christ the King, Moorhead; Hospice of the Red River Valley; and Roger Maris Cancer Center. Alfred’s services will be private. (Korsmo Funeral and Cremation Service, Moorhead, MN)

The family of Alfred T. Deutscher created this Life Tributes page to make it easy to share your memories.

Send flowers to the Deutscher family.