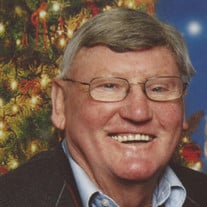 Due to technical issues, we were unable to livestream Fred's service. For a recorded version, please follow this link: https://portal.midweststreams.com/services/iframe/19533 Fred Lee Kreps was born August 6, 1927, in Fargo, ND, the seventh and last surviving child of Lloyd and Golda (Hainline) Kreps. Fred grew up in Minnesota and spent his entire life in Minnesota except for a tour of duty in Korea. He was inducted in January of 1951 and was discharged in February of 1953. Following his service, Fred farmed in Moorhead, MN, Fred married Marian Herbold on March 14, 1953, in Fargo and in 1956, bought a farm near Borup, MN, which is still owned and operated by the family. Fred began a second career as an auctioneer in the 1970s, handling estate and farm sales throughout the region. Fred and Marian loved to travel and were among the first visitors to China, when it opened to the world. Fred spent several extended periods of time in the Ukraine, supporting and assisting local farmers. He was president of the Minnesota Wheat Growers Association, where he travelled extensively to other countries promoting Minnesota wheat. Even after Fred retired from farming, he still loved to plant a field of flowers near the house. Another of Fred’s passions was buying and selling automobiles. He loved to attend the car auctions when he wintered in Florida. Fred died Thursday, January 21, 2021, in New Perspective Senior Living, West Fargo, ND, at ninety-three years of age. Fred is survived by his three children, Rebecca (Larry) Susic, Susan (Rodney) Wiger, and Mathew (Mary Jane) Kreps; seven grandchildren, Nathan Wiger, Nicholas (Shannon) Wiger, Bailey (Craig Rauser) Susic, Lacy (Travis Qualley) Wiger, Terry Kreps, Robert Kreps, and Timothy Kreps; and seven great-grandchildren. Fred was preceded in death by his wife of sixty-three years, Marian; son, Terrance Kreps; and siblings, Annabel Johnson, Doris Sweet, Mildred Lee, Margaret Whaley, William Kreps, Rose Rose, Ruth Matthews, Jean Bankers, James Kreps, and Ronald Kreps. Visitation will begin at 3 PM, with a Life Celebration Service at 4 PM, Sunday, May 16, 2021, in Korsmo Funeral Chapel, Moorhead. If unable to attend, Fred’s service will be livestreamed. Burial took place in Felton Cemetery, Felton, MN. Memorials are preferred to Great Plains Food Bank or Salvation Army.

Due to technical issues, we were unable to livestream Fred's service. For a recorded version, please follow this link: https://portal.midweststreams.com/services/iframe/19533 Fred Lee Kreps was born August 6, 1927, in Fargo, ND, the seventh... View Obituary & Service Information

The family of Fred L. Kreps created this Life Tributes page to make it easy to share your memories.

Due to technical issues, we were unable to livestream Fred&#39;s...

Send flowers to the Kreps family.