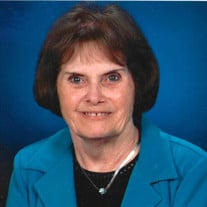 Ruth Chose, 88, passed away on Sunday, March 29, 2020, in River Pointe of Moorhead, MN, under hospice care. She had been struggling with Lewy Body Dementia for several years. Ruth Fossen was born on March 17, 1932, on the family farm near Fingal, ND. The family moved to Nome, ND, after the death of her father. She graduated in Nome and then attended Valley City (ND) State Teachers College. She taught school for one year in a rural school near Nome. On June 10, 1951, she married Robert Chose and they moved to Fargo, ND, where their three children were born. In 1956, they moved to Morris, MN, and back to Moorhead, in 1964, where she lived in the same home until she recently moved to River Pointe. Ruth babysat for a number of children while raising her own. She later worked for State Farm Insurance and MeritCare Hospital, from which she eventually retired. Ruth enjoyed being at the lake, gardening and playing cards and Scrabble. She also always loved taking care of babies and her grandchildren along with spending time with her extended family and neighbors. She was a member of The Lutheran Church of Christ the King for over 50 years and enjoyed many activities and volunteering with her friends there. Ruth is survived by her three children, Jon Chose, Perham, MN, and Cape Coral, FL, Kevin (Joan) Chose, Fargo, and Jennifer Christenson, Dilworth, MN; five grandchildren, Justin and Caleb Chose, West Fargo, Brianna Chose, Fargo, Jacob (Emily) Christenson, Omaha, NE, and Molly Christenson, Dilworth; two sisters, Irene Roe, Kindred, ND, and JoAnn Pedersen, Moorhead; a brother, Bill Fossen, McKinney, TX; and many nieces and nephews. She was preceded in death by her husband, Robert Chose, who died in 2009; her parents, William and Julia Fossen; and two sisters. A Memorial service for Ruth will be held on Friday, July 17, 2020, at 2 PM in Korsmo Funeral Chapel, Moorhead.

Ruth Chose, 88, passed away on Sunday, March 29, 2020, in River Pointe of Moorhead, MN, under hospice care. She had been struggling with Lewy Body Dementia for several years. Ruth Fossen was born on March 17, 1932, on the family farm near... View Obituary & Service Information

The family of Ruth D. Chose created this Life Tributes page to make it easy to share your memories.

Send flowers to the Chose family.