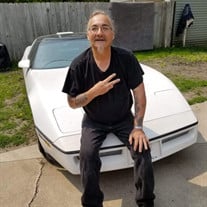 Robert Orlin Blue was born February 19, 1959, in Red Lake, MN, to Margaret Blue. He was baptized and confirmed at Goodridge Lutheran Church. He grew up in Goodridge, MN, where he loved football and basketball. He graduated from Goodridge High School in 1977. Robert enlisted in the US Navy after high school. When he returned from duty, he moved to Moorhead, MN, in 1980, following his true love, Wendy. On June 5, 1982, Robert was united in marriage to Wendy Rupprecht at Silver Creek Lutheran Church. They made their home in Moorhead and had two children, Jason William-Michael and Rachael Joy. Robert attended Moorhead Technical College and received his associates degree in Electronics. He worked various jobs, including S & S Electronics, West Fargo Truck Stop, Holiday, Jordan Millworks and Flash’s Trailers. He retired in 2000 due to health concerns. Robert loved stock-car racing, as a driver and later as a fan. He would talk about setting up a car. What to put on and what to take off. Racing was his passion but was secondary to family. Robert was always reading and learning about everything. His thirst for knowledge will be missed. Robert died of complications from his burns, on Wednesday, July 21, 2021, at Sanford Medical Center, Fargo, ND, at sixty-two years of age. Robert is survived by his loving wife, Wendy of Moorhead; daughter, Rachael of Fargo; grandkids, Quinn Blue, and Leo Swanson of Moorhead, and Nevaeh Swanson of Dilworth, MN; brothers, Norman (Laurie) Olson, Glyndon, MN, Richard (Melanie) Olson, Dilworth, Duane (Angie) Olson, Fargo, and Douglas (Wanda) Olson, Moorhead; sisters, Norma McLean, Fargo, and Barbara Flateland, Fosston, MN; many nieces, nephews, cousins, and a host of friends. He was preceded in death by his son, Jason, in 2018; mother, Margaret Olson; and stepdad, Melvin Olson. Robert endured much pain, and this kind-hearted man is now pain-free. Rest in peace, my friend. Visitation for Robert will be Tuesday, August 3, 2021, from 5 – 7 PM, in Korsmo Funeral Chapel, Moorhead. His Life Celebration service will be Wednesday, August 4, 2021, at 11 AM, in Our Savior’s Lutheran Church, Moorhead.

Robert Orlin Blue was born February 19, 1959, in Red Lake, MN, to Margaret Blue. He was baptized and confirmed at Goodridge Lutheran Church. He grew up in Goodridge, MN, where he loved football and basketball. He graduated from Goodridge High... View Obituary & Service Information

The family of Robert Blue created this Life Tributes page to make it easy to share your memories.

Send flowers to the Blue family.