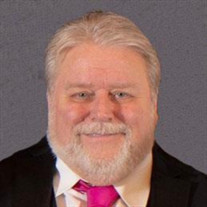 Randy “Hogie” Hogenson, 61, of Moorhead, MN, died Wednesday, April 1, 2020, in his home, under hospice care. Randy Lynn Hogenson, the son of Clair and Deloris (Syverson) Hogenson, was born in Moorhead on October 13, 1958. He grew up and received his education in Moorhead, where he graduated from Moorhead High School in 1977. Randy later attended Moorhead Vocational and Technical College. Randy was a life-long “north” Moorhead resident. He was also an avid trucker. He drove truck for a number of companies, and in 2006 started North Star Truck Wash in Fargo, ND, with his friend and business partner, Kent Krabbenhoft. Our Dad was a hard-working, big hearted, and loving person. His love for his family, especially his grandchildren was larger than life. He enjoyed making people laugh; something that he did very well. His little stunts were always memorable, whether it was him dropping a pan behind you, or a firecracker under your chair. He had a passion for the lake, his family and friends, and of course, trucks. Randy is survived by his three children, Amanda (Jeff Nelson) Hogenson, Perham, MN, Blake (Stacie Martin) Hogenson, Moorhead, and Brittani (Tyler) Holmstrom, Dilworth, MN; grandchildren, Jackson Hogenson and Bennett Holmstrom; his brother, Dewey (Deanna) Hogenson, Fargo; and a sister, Cheryl Larson, Moorhead; his significant other, Karen Hellem, Moorhead, and fur-daughter, Maui; four nieces; three great-nephews; and one great-niece. He was preceded in death by his parents, Clair and Deloris. A funeral service for Randy will be held at a later date in Our Savior’s Lutheran Church, Moorhead. He will be buried in Riverside Cemetery, Moorhead. Arrangements by Korsmo Funeral Service, Moorhead.

The family of Randy L. Hogenson created this Life Tributes page to make it easy to share your memories.

Send flowers to the Hogenson family.