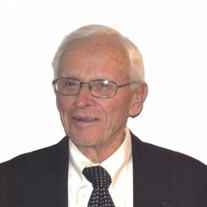 Morris W. Nedrebo, 97, of Argusville, ND, passed away Friday, August 13, 2021, in Eventide Fargo. Morris Wayne Nedrebo was born July 3, 1924, the son of Bennie and Jennie (Larsen) Nedrebo, in Seattle, WA. At a young age he moved with is family to a farm in rural Gardner, ND, and graduated from Gardner High School in 1942. After high school he began farming with his uncle, Henry. On December 18, 1947, he was united in marriage to Marlys Melbostad in Perley, MN. They made their home in the Gardner/Argusville area where they farmed for many years. After retiring from farming, Morris drove school bus and then worked as a maintenance man for Select Inn in Fargo. Marlys passed away on May 28, 2018. Morris then moved from the farm to an assisted living in Fargo before becoming a resident of Eventide Fargo in February of 2021. He was a member of Nora Lutheran Church, rural Gardner. Morris was a very talented musician and played with his wife, Marlys, in the Nedrebo Band for over 40 years. He was also a member of the Musicians Union which allowed the band to play for many public and private venues over those years. He is survived by his daughters, Maureen (Wayne) Bjerke, Argusville, and Loree (Ron) Fettig, Killdeer, ND; grandchildren, Brad (Errin) Bjerke, Argusville, Brian (Jennie) Bjerke, Hawley, MN, Bryce (Kristina) Bjerke, Lake Park, MN, Aleaha (Brett) Fettig-Ledeboer, Aberdeen, SD, and Abby (Jason) Wald, Berlin, ND; great-grandchildren, Zachary (Liz) Bjerke, Annika, Loki, Dawson, Bridger, Beau and Barrett Bjerke, Toni, Tana, and Ty Wald; and great-great-grandchildren, Anders Bjerke and Merida Bjerke; brothers, Clayton (Marion) Nedrebo, Fargo, and Kermit (Shirley) Nedrebo, Arthur, ND; and many nieces and nephews. He was preceded in death by his parents; wife, Marlys; great-great grandson, Benson Ledeboer; and sisters, Beverly Levin and Joan Jurgenson. A Gathering of Family and Friends for Morris will be from 5:00 PM to 7:00 PM, Wednesday, August18, 2021, with a 6:30 PM, Prayer Service, in Korsmo Funeral Chapel, Moorhead, MN. His Memorial Service will be 1:00 PM, Thursday, August 19, 2021, in Nora Lutheran Church, rural Gardner, ND, with burial in Nora Lutheran Cemetery. (Korsmo Funeral and Cremation Service, Moorhead, MN)

Morris W. Nedrebo, 97, of Argusville, ND, passed away Friday, August 13, 2021, in Eventide Fargo. Morris Wayne Nedrebo was born July 3, 1924, the son of Bennie and Jennie (Larsen) Nedrebo, in Seattle, WA. At a young age he moved with is... View Obituary & Service Information

The family of Morris W. Nedrebo created this Life Tributes page to make it easy to share your memories.

Send flowers to the Nedrebo family.