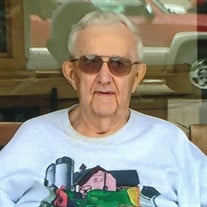 For Family and Friends that would like to view LeRoy's service, click on the following link: https://portal.midweststreams.com/services/iframe/14631 LeRoy Marvin Brown was born in Hancock, MN, the second of eight children of Erscel and Helen Brown. He attended school in Hancock and helped his parents on the family farm until he graduated from high school in 1951. He then worked for farmers and drove truck until he got a job at the Starbuck (MN) Creamery where he worked until he was drafted into the Army. LeRoy was then sent to Aberdeen, MD, for training and to Germany for the remainder of his two years of service. LeRoy married Ione Lenora Berg in Fron Church in Starbuck on February 4, 1956, before beginning his basic training. They were blessed with three children, Neil (Sue) Brown, Debbie (Jim) Gienger and Laurie (Dwight) Larson. They also had eight grandchildren, thirteen great-grandchildren and four great-great-grandchildren LeRoy and Ione would have celebrated their 65th wedding anniversary on February 4, 2021. After returning from the service, LeRoy worked at Fairmont Creamery in Morris, MN, Midwest Oil in Minneapolis, MN and Fargo, ND, and North Star Dairy in Fargo before starting his own business in 1970 as Brownies Dairy. He ran dairy routes from Glyndon, MN, to Enderlin, ND, for 27 years. After retiring from the dairy business in 1997, he worked hauling beets for farmers and hauling fertilizer for Simplot, before fully retiring. LeRoy enjoyed spending time with his children, grandchildren, and great-grandchildren, playing cards, building and fixing things, having coffee with the guys at the Community Center, traveling, country music shows and Kathie Brekke at Triumph Lutheran Church LeRoy died on Wednesday, November 25, 2020 in Eventide on Eighth, Moorhead, from complications of Covid-19. In addition to his wife, children, grandchildren, and great-grandchildren, he is also survived by his brothers, Vernard (Barb) Brown, Donald (Barb) Brown, and LuVerne (Marlene) Brown; and sisters, Carol Lundebrek, Janice Swenson, and Lorraine (Marvin) Hanson. LeRoy was preceded in death by his parents, Erscel and Helen Brown; father-in-law and mother-in-law, Ingvald and Lillie Berg; brother, Raymond Brown; sisters-in law, Sylvia Brown and Stella Koehntop, and brothers-in-law, Arnold Lundebrek, Gary Swenson and Fritz Koehntop. A Private Funeral Service will be held for LeRoy and burial will take place in Riverside Cemetery, Glyndon. For Family and Friends that would like to join LeRoy’s Family for the Funeral Service, you can access the live-stream on the link found on his obituary page on the Korsmo Funeral Service website, Tuesday, December 1, 2020, at 2:00 PM. (Korsmo Funeral Service, Moorhead, Minnesota)

For Family and Friends that would like to view LeRoy's service, click on the following link: https://portal.midweststreams.com/services/iframe/14631 LeRoy Marvin Brown was born in Hancock, MN, the second of eight children of Erscel and Helen... View Obituary & Service Information

The family of LeRoy M. Brown created this Life Tributes page to make it easy to share your memories.

For Family and Friends that would like to view LeRoy&#39;s service,...

Send flowers to the Brown family.