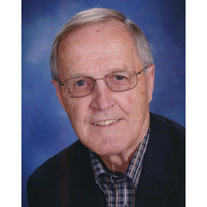 Lanny G. Brantner, age 82, died on April 4, 2020 surrounded by his family. He was born September 15, 1937, in Fargo, ND, the son of Paul and Olive (Kragnes) Brantner. Lanny grew up in the Georgetown –Felton area and graduated from Felton High School in 1955. In 1959 he graduated from NDSU with his degree in agriculture and went to work for the NDSU Extension Service. While in Fargo he served in the Army National Guard until 1964 when he left for Iowa accepting an agency position with State Farm Insurance. It was in Decorah, Iowa that he met his wife Lois Watts. They were married in June, 1967 and shared over 52 years of marriage. In 1975 he accepted a State Farm Agency Manager position and returned to Fargo. He worked with State Farm in this role until his retirement in 1996. During his career he earned the designations of Charted Financial Counselor and Charted Life Underwriter. He was an active person all his life—basketball, football at Felton, track and field at NDSU serving as team captain his senior year. He had an active adult lifestyle being a Cass and Clay YMCA member for 37 years. At the Y he served on the Endowment Board (nine years), Heritage Club Member, and helped raise funds for the Partner of Youth Programs. Many summer family gatherings will be remembered on Cotton Lake in Rochert, Minnesota in addition to swimming, boating and fishing. He helped reestablish the Cotton Lake Association, Cotton Lake Area Foundation and President of Becker County Coalition of Lake Associations 2001-2003. Hope Lutheran Church was his home for his Christian Lifestyle of 45 years. There again he was active and gave of his time and talents to the church council, president two times, and foundation board. He loved spending time with his grandchildren and attending their activities with an infectious smile and his trademark, “Well, Hi.” He enjoyed a cup of coffee and could engage in a conversation with anyone he met. Many of these conversations involved his beloved NDSU Bison, where he attended numerous sporting events, especially football, where he was a season ticket holder for 45 years and a long-time member of Team Makers. He is survived by his wife Lois, two sons: Lance (LaCinda) Brantner of Elgin, OK, Laine (Tiffani) Brantner and four grandchildren-Sophie, Josie, Sylvie, and Micah all of Fargo. Brother Jerry (June) of Fargo, Brother Mike(Lynn) of Glyndon, Sister Kathy(Eric) Anderson of Billings, MT, Sister-in-law Arlys Brantner of Moorhead and many nieces and nephews. He was preceded in death by his parents, brother Perry and two nephews Douglas and Ron. A memorial service for Lanny will be Friday, July 10, 2020 with Visitation beginning at 9:00 am and Service at 11:00 am in Hope Lutheran Church – South Campus, Fargo, ND. Due to Covid-19 restrictions, masks and social distancing will be required. In lieu of flowers: Memorials are preferred to the foundations mentioned and where he gave much of his time: Hope Lutheran Church, YMCA of Cass and Clay County, and Cotton Lake Association. To view the live stream of Lanny's Memorial Service, please click the link below: https://boxcast.tv/view/lanny-brantner-funeral-efkjq8aq45cwtbbb3h1h (Korsmo Funeral Service, Moorhead, MN)

Lanny G. Brantner, age 82, died on April 4, 2020 surrounded by his family. He was born September 15, 1937, in Fargo, ND, the son of Paul and Olive (Kragnes) Brantner. Lanny grew up in the Georgetown &#8211;Felton area and graduated from Felton... View Obituary & Service Information

The family of Lanny G. Brantner created this Life Tributes page to make it easy to share your memories.

Send flowers to the Brantner family.