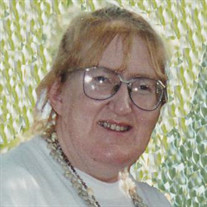 Dianne Knutson-Davis, 71, of Fargo, ND, passed away Thursday, December 19, 2019, in Villa Maria, Fargo, surrounded by family and under the care of Hospice of the Red River Valley, and her Villa family. Dianne was born February 28, 1948, in Fargo, to Albert and Delores (Gunderson) Knutson. She grew up in Moorhead, MN, and graduated from Moorhead High School. Dianne studied at Mankato (MN) State College for a year. She married Dale Davis, and after his untimely passing, she made her home in Valley City, ND. In 2007, Dianne moved to Villa Maria, Fargo, for health reasons. She enjoyed her daily activities, especially reading, knitting, music events and computer time. Dianne was preceded in death by her parents, her husband, several aunts, uncles, and cousins. She is survived by her brother, George (Laura) Knutson; and sisters, Beverley (David) Sorgen, Mary Knutson, and Marlene Knutson; her beloved nieces, Trish (Chris) Adams, Carson Knutson, and Mallory (Ben) Annear; her nephew, Mike (Melissa) Grove and their children, Kate, Kellyn, Blake, Devon, Maceo, and Max; aunts, Mabel Knutson and Dorothy Knutson; and several cousins. Dianne always had a sweet soul and will be missed by many. The family wishes to express their deep appreciation and gratitude to the caregivers and staff of Villa Maria, who became part of Dianne’s extended family. Visitation for Dianne will be Tuesday, December 24, 2019, from 10 AM to 11 AM, in Korsmo Funeral Chapel, Moorhead, followed by her funeral service at 11 AM. Dianne will be buried at Moorhead Memorial Gardens. (Korsmo Funeral Service, Moorhead, MN)

Dianne Knutson-Davis, 71, of Fargo, ND, passed away Thursday, December 19, 2019, in Villa Maria, Fargo, surrounded by family and under the care of Hospice of the Red River Valley, and her Villa family. Dianne was born February 28, 1948, in... View Obituary & Service Information

The family of Diane Knutson-Davis created this Life Tributes page to make it easy to share your memories.

Send flowers to the Knutson-Davis family.