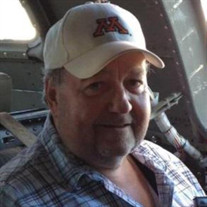 William “Bill” Ernest Sisk, 76, of Moorhead, MN, passed away March 3, 2021, in his home. Bill was born on October 25, 1944, in Kansas City, MO, to Ernest and Elaine (McNeill) Sisk. Bill graduated from Madison (MN) High School in 1962. In September of 1962 he joined the United States Air Force, serving four years, including time in Vietnam. After he was honorably discharged from the Air Force, Bill worked as a power lineman in Willmar, MN. After that, he worked as a truck driver and later as a safety director for E.W. Wylie and Fargo Freight, both in Fargo, ND. In 1963, Bill met Martha “Marty” McLagan and immediately fell in love. Bill and Marty were married on March 27, 1964, in Bellingham, MN, just six months after meeting. Together they raised two children, Richard and Kristy. Bill’s grandsons, Aaron and Derrick, were his pride and joy! Bill was a huge Moorhead Spuds Hockey fan. He attended as many home games as he could. He also enjoyed hunting, fishing, bowling, air shows and airplanes. He received his private pilot’s license and loved flying, until his health no longer allowed it. Bill is survived by his wife, Marty; children, Richard (Tymberlee) Sisk and Kristy Sisk; grandsons, Aaron and Derrick; and brother, Randy (Marty) Sisk, Page, AZ. He was preceded in death by his parents, Ernest and Elaine; and sister, Sherron. A visitation will be held one hour prior to Bill’s service. A Life Celebration Service will be on Saturday, March 6, 2021, at 2:00 PM in Korsmo Funeral Chapel, Moorhead, MN. Burial will be in Fargo National Cemetery at a later date. In line with CDC and Minnesota guidelines, masks and social distancing will be enforced.

The family of William "Bill" Sisk created this Life Tributes page to make it easy to share your memories.

Send flowers to the Sisk family.