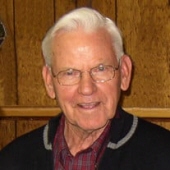 William "Bill" Dean Winberg, age 95, died Monday, February 17, 2020, in his Fargo, ND, home surrounded by the love of family both near and far away.

Bill was born October 11, 1924, to John A. and Leda Iown (Evans) Winberg, the fifth of seven children. His childhood was spent on the farm four miles north of Eldridge, ND, in the Pipestem Valley. He graduated fourth in his class, from Eldridge High School, in 1942.

Bill married the love of his life, Mary Jean Wanzek, on June 14, 1949, in St. Mathias Catholic Church in Windsor, ND. They spent the next seventy years loving, living and raising their five children.

Bill was drafted into the Army during the Korean War in October, 1950. He served two years in the Eighth Infantry Regiment of the Fourth Division as head cook for Headquarters in the Headquarters Company in Bremerhaven, Germany.

Bill spent forty years working with M & H. Prior to entering the service, Bill managed the M & H Gas Station in Jamestown, ND, where he returned after his military service. He was transferred to Aberdeen, SD, and finally to Moorhead, MN, in 1959. In 1960, M & H became the first fast food restaurant in the area, well known for their broasted chicken, hamburgers, and Bill's homemade chili.

Bill was a clever, insightful, and humble man with a distinct sense of appropriateness. He was known for his quick wit, his generosity, his cooking, and his love of words and nature. Bill and Mary enjoyed hosting backyard gatherings for family and friends, traveling, and fishing. Bill was a man to whom many looked up to for guidance, with admiration and respect. He will be missed by many.

Visitation for Bill will be Thursday, February 20, 2020, from 5 - 7 PM, with a prayer service and Rosary recitation at 6:30 PM, in Korsmo Funeral Chapel, Moorhead. The Mass of Christian Burial will be Friday, February 21, 2020, at 1 PM, in St Joseph Catholic Church, Moorhead. Burial will be in the spring in St. Pauline Cemetery, Windsor.

To order memorial trees or send flowers to the family in memory of William D. Winberg, please visit our flower store.