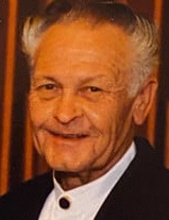 William Noble Thompson was born on August 9,1943, in Britton, SD, to Noble and Martha (Sliper) Thompson, the fourth of four children. He grew up on a farm attending school in Havana, ND Dakota, through his sophomore year and then transferred to Moorhead High School, Moorhead, MN, graduating in 1961. He then continued his education in auto body repair at North Dakota State College of Science, Wahpeton, ND, graduating in 1963. After graduation he enlisted in the North Dakota Air National Guard where he began basic training in San Antonio, TX at Lackland Air Force Base until he was Honorably Discharged in 1970.

Bill started his career in auto body repair in Jamestown, ND, where he worked for one year before moving to Fargo where he was employed by Muscatell Chevrolet until 1979. He was united in marriage to Deloris Handel on July 11, 1970, and made their home in Moorhead. They welcomed their son, Daniel William on May 3, 1973, and daughter, Deborah Deloris on September 6, 1975. In 1979 he became a partner in Twin City Body Shop, Fargo, and worked there until the business was sold in 1998. He then was employed by Duval Construction Company in Fargo, until his retirement. Bill loved dancing, playing cards, country music, going on casino trips and watching the Golden Girls. Most of all, he loved spending time with family and many friends. He was blessed with four beautiful grandchildren. He could sit for hours talking about anything and everything. He had a heart of gold and will be missed dearly.

He was preceded in death by his parents, Noble and Martha Thompson; sister, Betty Paluck; two brothers-in-law, Marlan Stole and Willie Paluck.

Celebration of life will be held privately with the family at a later date. The family would like to thank Ethos Hospice for the compassionate care they provided Bill in his final days.

To order memorial trees or send flowers to the family in memory of William "Bill" Thompson, please visit our flower store.