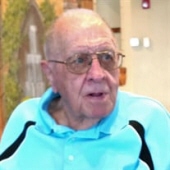 Wayne Lyle Krabbenhoft was born March 14, 1931, to Erhardt and Selma (Skogstad) Krabbenhoft. He grew up and attended school in the Page and Davenport, ND, areas.

He enlisted in the United States Air Force; a fact he was always very proud of. After his time in the service, he came home to farm and marry the love of his life, Joyce Jacobson. They were united in marriage October 22, 1955. Together they raised their five children. In 1969, Wayne stopped farming and moved the family to Fargo, ND, where he worked for Fairway Foods until retirement.

After retirement, they found enjoyment being with friends and family, with trips to Las Vegas, and later Laughlin, NV. Wayne loved to reflect back on those trips and whether or not he "broke even" or "made a killing." He was always up for a good game of cards, especially "31," watching NASCAR, and enjoying a few cold beers. He will be dearly missed by all that knew him. Wayne died Saturday, March 13, 2021, in Riverview Place, Fargo, at eighty-nine years of age.

Wayne was preceded in death by his wife, Joyce; his parents, Erhardt and Selma; brother, Donald; and sister, Inez Cossette.

The family asks that in lieu of flowers, donations be given to the Sanford Health Foundation, Fargo, in Wayne's memory:
https://www.sanfordhealthfoundation.org/donate/