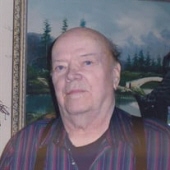 Walter G. Selberg, 94, Moorhead, MN, died Monday, November 18, 2019 in Villa Maria in Fargo, ND.
Walter Gordon Selberg was born September 15, 1925, in Grand Forks, ND, to Arthur and Elizabeth Selberg. At a young age Walter and his family moved to Fargo. He graduated from Fargo High School. After high school, he enlisted in the United States Navy and proudly served his country on the USS Monterey during WWII. During one of his missions, Walter's plane was shot down over the Pacific near Japan and he was held as a POW for four months. He completed his military career in Hawaii working as an airline mechanic. Following his honorable discharge, Walter lived in Garrison, ND, working as a house painter. Walt returned home to Fargo and began working for Hegland Sign Company.
On March 31, 1951, Walt was united in marriage to Leona Wilson. He and Leona had four children, Charles, Barb, Janine and Laura. He later started his own company, Walt Selberg Sign Company. For over 25 years, Walt owned and operated his company. He also founded F-M Sign Company which he operated until retirement.
Walt enjoyed fishing, bow hunting, scuba diving, collecting Egyptian artifacts and loved the sport of Fencing. He had a fondness for animals, always having a pet of sort, in his care. He also enjoyed travelling throughout the United States and to several countries.
Walt is survived by his three children, Charles Selberg of Moorhead, Barbara (Ronald) Gerber of Fargo, and Laura Selberg of Moorhead. In addition, he is survived by four grandchildren, Andy Gerber, Nicole Gerber, Jesse (Cindy) Vazquez and Arturo Vazquez.
He was preceded in death by his parents, one daughter, Janine; two brothers, Arnold Selberg and Charles Selberg; and special friend, Kristeen Ferris.
Funeral Service for Walt will be held Friday, November 22 at 10AM in Korsmo Funeral Chapel, Moorhead. Visitation will be held one hour prior to service. Interment will be in Fargo National Cemetery with military honors accorded by the FM Area United Patriotic Bodies.

To order memorial trees or send flowers to the family in memory of Walter G. Selberg, please visit our flower store.