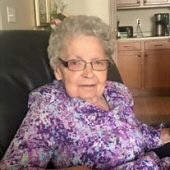 Vivian was born April 8, 1936, the youngest of five children, to Dewey and Leah (Johnson) Annonson. She was raised and educated in Debs, MN.

Vivian was devoted to her family. A loving wife, mother, grandmother, and great-grandmother, one of her greatest joys was getting together with everyone during Christmas. Another favorite was coffee time with family and friends. In December of 1954, Vivian was united in marriage to James Oxton. They made their home in Moorhead, raising their four children. James passed away March 25, 2003.

She was preceded in death by her parents; husband, James; and all her siblings, William Annonson, Carol Nord, Margaret Streiber and Deloros Bartley.

Arrangements by to Korsmo Funeral and Cremation Service, Moorhead, MN
Memories may be shared online at www.korsmofuneralservice.com

To order memorial trees or send flowers to the family in memory of Vivian T. Oxton, please visit our flower store.