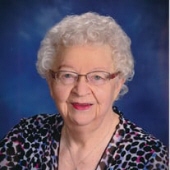 Vivian Mattson, daughter of Hilbert and Christine (Bernhardson) Mattson was born June 7, 1923, in Comstock, MN. She grew up and received her education in Comstock, where she graduated from high school in 1941, as Salutatorian. She then attended Fargo Business College, Fargo, ND. She worked for 12 years at Farmers Union Livestock in West Fargo.

On July 14, 1949, Vivian married Walter Stenson, who was from Finley, ND, at the Clara Lutheran Church, Comstock, where she had been both baptized and confirmed. Following their marriage, they made their home in Moorhead, and attended Lutheran Church of the Good Shepherd, where she was active in the WLECA Society, served 50 plus years on the altar guild, and 25 plus years as a wedding hostess. In 2009, they celebrated 60 years together. Vivian was always busy as a "helpmate" to Walter and their hobbies. She was a seamstress, and enjoyed gardening, cooking, knitting, crocheting, painting, hardanger and quilting. She was always taking classes to learn something new.

Vivian and Walter built and maintained their Stenson "Sommer Hjem" on the lake, where all the family gathered for fun and family time. Many very good memories were made there.
While she was growing up, Vivian was caregiver for her grandpa John. This was the start of her care giving. She was devoted to helping family, friends, and others.
Vivian was proud of her Swedish heritage. Walt and Vivian made a pilgrimage to Norway and Sweden in 1982, to walk in their ancestor's footsteps.

To order memorial trees or send flowers to the family in memory of Vivian Stenson, please visit our flower store.