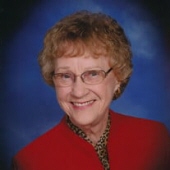 Verona DeLila Nelson was born on September 7, 1930, in Grygla, MN, to Peder and Mabel (Rinnan) Nelson. Verona was raised in Hendrum, MN, and graduated from high school there. Verona was known throughout her life for her fun-loving, creative and imaginative spirit. This was shown through a childhood story of her preaching to the various farm animals in the barn from a pulpit she kept there. This spirit carried on throughout her life and is beneath many of the memories of Verona.

Verona was introduced to Harold Haugen by his cousin and, after a short period of time, they began dating. They were married on June 30, 1951, at Camp Roberts, CA, before Harold went to Korea. Harold went away to war and came back to a wife and a son. They built a home north of Moorhead.
While Verona held various positions in her life with Warner Insurance, Crystal Sugar, JC Penney, Avon and Stop-N-Go, the position most import to her was that of being a wife, mother and homemaker. She loved cooking and baking and was exceptional at both. Whether it was a home cooked dinner or a special dessert, Verona would prepare something special for her family and friends. She loved to entertain and was extremely conversational and engaging with others. Verona especially loved chocolate and even a month ago, savored it as if it were the first time she had tasted it.

After Harold retired in 1989, they were known for spending much of their winters in Apache Junction, Arizona, until Harold died in 2007.
Family, faith, friends and fun are the four words that describe Verona. There was never a dull moment around her. She was deeply loved and will be dearly missed.

Visitation will be from 1-2 PM, followed by a funeral at 2 PM, Tuesday, July 23, 2019, in Korsmo Funeral Chapel, Moorhead. Interment will be in Moorhead Memorial Gardens.

To order memorial trees or send flowers to the family in memory of Verona DeLila Haugen, please visit our flower store.