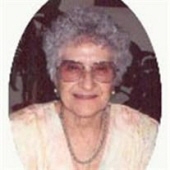 Verna Adeline Jevning was born December 3, 1916, to Ole and Ida (Larson) Jevning, in Fisher, MN. Verna was raised in the Climax, MN area, where she graduated from high school. On July 29, 1937, Verna was united in marriage to Morris Marsten in Ada, MN, and they made their home in Ada, MN. Verna worked in the food service area for Ada public schools. They moved to Moorhead, MN, in 1956, and Verna continued to work in food service at Moorhead State University. While at MSU, Verna was fraternity mother for Alpha Epsilon and Sigma Tau Gamma fraternities. She retired from MSU in the early 1970s, but continued to work in food service at Ramada Inn and Hornbachers deli department, both in Moorhead. Morris preceded her in death on April 20, 1988. In August 2000, Verna entered Eventide Lutheran Home, Moorhead where she died Thursday, June 19, 2003, surrounded by her family, at eighty-six years of age.
Verna is lovingly survived by her three sons, Kent and his wife, Becky of Crumpler, NC, Tim of Moorhead, and Brad and his wife, Sharon of Kerkhoven, MN; eight grandchildren, Greg, Nathan, Erin, Megan, Jeremy, Rhett, Chantell, and Nikki; one great-granddaughter, Camille; a sister, Alyce Amundson of Moorhead; and sisters-in-law, Orvella Jevning of Moorhead, and Alvina Marsten of Ada. In addition to her husband, Morris, Verna was preceded in death by two brothers and one sister.
In lieu of flowers, memorials may be sent to Eventide Lutheran Home, Moorhead. Friends and family may sign the online register book at www.korsmofuneralservice.com

To order memorial trees or send flowers to the family in memory of Verna Marsten, please visit our flower store.