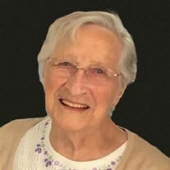 Verna Anne Hodgins was born January 13, 1924, in Tessier, Saskatchewan, to William and Ann (Larson) Hodgins. She grew up and attended school in Hannah, ND.

On January 4, 1947, in Salem, OR, she was united in marriage to Herman Magnusson. In 1956, they established a home in Moorhead where Verna lived until 1994. Through the years she lovingly raised her own children and often cared for children of family or friends with that same love and devotion. Being a grandma and great-grandma was a joy to her.

Verna worked alongside Herman in his business ventures, worked at George Washington Elementary, and later at the Clay County Solid Waste Office. She was involved as a leader in Boy Scouts and Campfire Girls. As an active member of her church, she served on councils and participated in quilting, Circle, and Friday Fellowship. She moved to Rosewood on Broadway in January of 2016.

She was preceded in death by her husband, infant daughter, parents, three sisters, two brothers, and many very special friends.

A Visitation for Verna will be Sunday from 5 PM until 7 PM, with a 7:00 PM Prayer Service in Korsmo Funeral Chapel, Moorhead.

Burial will be in Mountain City Cemetery, Mountain, ND.

To order memorial trees or send flowers to the family in memory of Verna Magnusson, please visit our flower store.